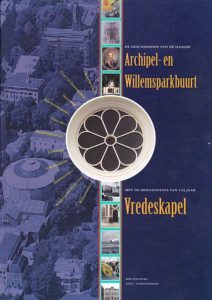 For the January 2017 Newsletter, I wrote an article about Mr. Bob Feenstra, author of the book The history of the Haagse Archipel- and Willemsparkbuurt.

Then it seemed to me a nice idea (it was a year later) to take our local residents – and readers of the website – on a “walk” through the Archipel and Willemspark neighborhood using the stories and descriptions from the book. from Mr. Feenstra.

Along the Buitenhuizen, the Hofjes, the Tolhuizen, the statues and monuments and much more. Since I needed his permission of course, I visited Mr. Feenstra again and he thought it was a great idea. I was allowed to use his texts and also the photographs from his book for our website.

The first article is about the “courtyards” in our neighborhood.

We can rightly call the Hague a “courtyard city” because no fewer than 115 courtyards have been preserved. We know three different types of hofjes (courtyards). The best known are the de Liefdadigheidshofjes (charity courtyards). In earlier centuries it was the charity of the rich who made it possible to build these courtyards for older, mostly needy people. There was also a bit of their own interest around the corner because they acquired natural prestige and, in this way, they could also live on their name (such as hof van Nieuwkoop and hofje van Wouw). In addition, the charity at that time was certainly and for a large part a matter of the church. Think of the oldest courtyard, the Heilige Geesthofje. In the second half of the 19th century the courtyards were mainly built for profit (Exploitatiehofjes) and at the same time there was also social housing in the form of courtyards.

De exploitatiehofjes (exploitation courtyards) can roughly be divided into two groups. The hofjes that were built purely for profit, where as many houses as possible were built together on an inner court; cottages of dubious quality that were mostly poorly maintained. In addition to the aforementioned houses, there were also hofjes of housing associations. This group can be described as social housing.

In the exploitatiehofjes, there were also sometimes found little pawns that were used for small-scale business operations, such as water distilleries, usually a candy store.

Many old hofjes were accessible via a covered gate with a house built over it. This created a virtually enclosed courtyard. The situation of poverty and intensive habitation by very large families, which used to occur in the old exploitatiehofjes, is now no longer present. Most cottages are now privately owned.

Sometimes there are also houses put together and beautiful homes are created that are more or less sheltered from the crowds and traffic noise from the street.  In the past, buyers were not so interested in the courtyard houses.  Now the hofjes can compete well with the houses located on the street, also with regard to the purchase price!

Next time I will take you to a number of “our” hofjes.
It goes too far to describe all 27 hofjes in the Archipel and Willemspark neighborhood, but I would like to pass along information about a few of them.