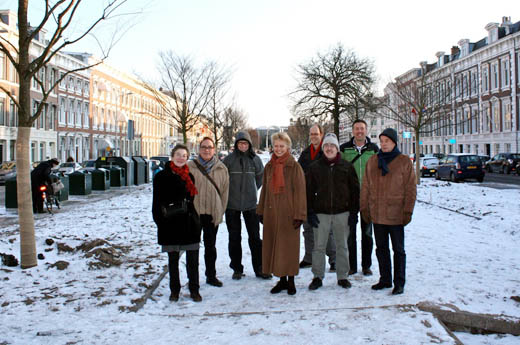 7 February 2012 – Residents already know there’s lots happening in our neighbourhood, but those in politics are also interested in hearing about it and seeing it with their own eyes. ‘Our’ alderman (for city district Centrum) Marjolein de Jong of the D66 party visited us on 7 February for an update on the kinds of things going on in the community. Her visit started at Nassauplein where a delegation of residents and businesses brought Alderman de Jong up to speed on all the changes taking place on their doorstep with the ambitious makeover of the central garden area. The Alderman was complimented on the application and drive with which she and her staff have tackled the renovation work.

After a short walk via Bankastraat, the visit continued in the Klokhuis Community Centre where a discussion about a range of matters took place with volunteers and board members of the Klokhuis and the A&W Community Association. In particular Alderman de Jong was told about the important role both the Klokhuis and the senior citizen’s meeting point Het Schakelpunt play in the community.

Another important matter that received attention was the apparently casual manner in which the Noordwestelijke Hoofdroute (main north-west arterial route) had been scrapped after Alderman (for Traffic) Smit’s comment on the plan. The choice seems to be now for ‘inprikkers’ (distributor or feeder roads) to carry traffic directly (via the planned Rotterdamse Baan) into the city centre. In the Community Association’s view this will substantially increase the already heavy amount of traffic passing through our district.

Alderman de Jong was therefore asked as council member responsible for the city centre district to look into the possibility for further deliberation and consultation on this matter. The Alderman has promised to discuss the subject further with the Community Association.