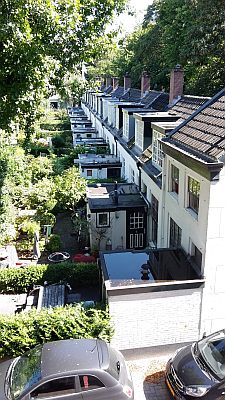 On 8 October 2016 we celebrate the 150th anniversary of het hofje Het Javalaantje (almshouses Het Javalaantje), situated between Frederikstraat and Koninginnegracht, in Willemspark II. This section of Archipel and Willemspark is bounded by Koninginnegracht, Javastraat, Schelpkade and  Mauritskade/dr. Kuyperstraat. Just outside the former moat of The Hague, of which Mauritskade was part. Also outside the ‘real’ Willemspark on the other side of Nassaulaan, the former boundary of the park that belonged to King Willem II. The park was built on in the second half of the 19th century.
For the most part Willemspark II came into being between 1862 and 1900. Willemspark I and Archipel were planned and built by the municipality, Willemspark II was the result of private initiatives. The street plan of the area as we know it today developed along the old pattern of paths and ditches.
In 2015 we realized that the 150th anniversary of het hofje was nearing. Research into its history had been done in 2006 when Het Javalaantje became a municipal monument. It appeared it had been built around 1870 by a Mr Haring, probably to house the civil personnel of the Frederikskazerne (Frederik barracks). That was very well possible as het hofje was built directly behind the barracks, but I wanted to be more certain, especially about the date of building.
My points of investigation were: Mr Haring, the Frederikskazerne and the date of building, approximately 1870.
I found that in the 19th century the Haring family played an important part in Willemspark II. Laurens Pieter Haring (1777-1859) was an innkeeper who owned an inn and hostelry for coaches that was named “Den Zoeten Inval“. This inn stood where now Frederikstraat meets Javastraat. His brother Pieter Antonius was a market gardener and he probably inherited part of his brother’s property when the latter died in 1859. According to the land registery office Pieter Antonius sold a number of pieces of land in 1862, after the Municipality had summoned him to pull down Den Zoeten Inval so that Frederikstraat could be extended to meet Javastraat. That was the end of the Haring family connection.
I continued my research with the Frederikskazerne. Until mid 19th century the barracks, built in 1769 (next to Den Zoeten Inval), was the only building of importance in the area. Behind the Frederikskazerne was a ditch and next to it a few houses and a riding school. Inquiry at the Ministry of Defense did not result in information about a possible hofje, so this was another dead end.
Next came the date of construction: around 1870. Old street plans proved not consistent. In the same year het hofje can be found on one plan and not on another.
With the land registry office’s allotment numbers one should be able to search back into time. Unfortunately this proved to become more difficult in 1913, the year that the allotment numbers had been changed. In the years prior to that quite a lot of things changed as well and I was about to loose my way. But an archivist at the municipal archives came to my rescue: the land registry ledgers proved that 1866 was the founding year. In that year only 30 houses were registered, 10 years later a house was added to either end of het hofje.
In an official municipal report of 1912 the name of the then owner of het hofje is mentioned: J.L. van der Leeuw. Renée Spronk, one of my neighbours in het hofje, searched the internet for the Van der Leeuw family and she found a descendant who had come into possession of family chronicles, written by another member of the family: Jacobus van der Leeuw. This proved to be a real treasure that substantiated the information of the land registry. These chronicles showed that his grandfather Gerardus van der Leeuw, who was a master mason, bought pieces of land at an auction in 1862. He then built (most of) the houses of het hofje. And when these were finished its foundation was registered at the land registry office.
So the main part of het hofje was built before 1866. And for very practical reasons: the man who built it was 52 years old when he bought the property and he needed provisions for old age. Renting out working class houses was a lucrative business as the family chronicals tell us. In all he built 64 houses, half of them along Javalaan (the present side street of that name of Javastraat). The remaining 32 built up het hofje along a ditch that ran at right angles to the ditch behind the Frederikskazerne.
On the other side of that ditch were gardens that belonged to the Repelaer family. Mrs Repelaer and her daughter lived at Koninginnegracht 21, presumably from the second half of the 19th century until a few years before the second world war. They had a back entrance to their gardens, the current Bosje van Repelaer.
We now live in the year 2016, so why not celebrate the 150th anniversary of het hofje this year? Before this year we never knew how old het hofje really was, so it seems to be the most logical thing to do.
I wrote down the history of het hofje and the coming into being of Willemspark II. The result is the anniversary book that will be presented to the great-great-grandson of the founder during the celebration of the 150th anniversary. The book is a private publication, but it is for sale for anyone who is interested.  (Please contact: mcgoke@gmail.com).

Invitation to Neighborhood Council meeting 18 May 2021