Bankastraat on the road this year –
June 2009

After Alderman Peter Smit’s commitment to two of the four most important Bankastraat burgerinitiatief proposals at the city council meeting on 5 March, and his rally call to “get the show on the road”, initially everything went rather quiet on the implementation front.

In the meantime however a pedestrian crossing has been installed at the T-junction between hoge Bankastraat and Aletta Jacobsweg and the road markings repainted. In the normal course of events absolutely fine, but what about the simple, “unsurpassable barrier” that was promised! 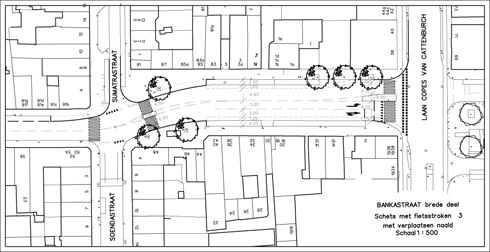 Fortunately the Traffic Working Party has now received a detailed schedule of the reorganization of Bankastraat:

2010
The design for the reorganization of the broad section of Bankastraat is currently in progress and work will be carried out during the major revamp planned for 2010. This section of the street must become less of a “race track” and more of a  “village square”. Such a metamorphosis is entirely viable without sacrificing parking places and without contravening the regulations regarding the emergency services. Naturally local residents will be closely involved during the whole transformation process.

27 November 2008 – The burgerinitiatief was accepted as admissible by the council committtee without any resistance. In the coming 12 weeks the substance of the initiative will be examined and Willem van Gijn of our traffic working group has been invited as petitioner to provide an explanation of the plan submitted. 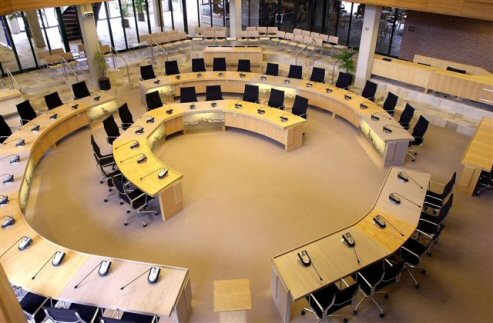 10 November 2008 – The chairman of the municipal council, mayor Van Aartsen, advised the council committee to take up the Bankastraat burgerinitiatief. The council will come to a decision, concerning procedure rather than content, in their meeting scheduled for 27 November 2008. Deliberation and the decision-making process follows within eight weeks after the decision to take up such an initiative. This term can be extended by four weeks if necessary.

Should the council find the burgerinitiatief inadmissible, it is customary to submit the initiative to the council executive for advice.

More than 1,000 signatures for a safer Bankastraat

More than a thousand residents in The Hague have put their signature to the “burgerinitiatief” petition for a safer Bankastraat and Bankaplein since lobbying started on 15 September.

The 1,177 signatures were submitted to the city council on 28 October. This sort of initiative enables individual neighbourhoods to get important issues onto the council’s agenda.

A safer and more environmentally pleasant Bankastraat is the goal of a special working group made up of local Archipelbuurt residents. By means of a burgerinitiatief (remember the Riouwbrug!) they want to convince the city council to agree to the reorganization of Bankastraat. See proposal text below.

The working party expects to be able to collect the necessary minimum of 750 signatures required for their proposal during September. Every Hagenaar aged 14 and older can sign the petition.

Residents will visit as many homes in the district as possible to gather signatures.

In a letter to the members of the City Council dated 23 February 2009, the Fietsersbond (Cyclists Union) gave its comments on the Bankastraat citizen’s initiative and the council’s reaction to the initiative proposal.

– the reasons for the Fietsersbond’s support of the initiative

– what the Fietsersbond thinks of the initiative proposals

– the pros and cons of cycle lanes and the reasons why these should be the ultimate choice.

Questions, questions and yet more questions. Members of the City Districts Committee visiting the Archipelbuurt fired one question after another at alderman Peter Smit. The subject was the burgerinitiatief, supported by more than 1,200 Hague residents – especially those living in the Archipelbuurt – to improve the safety and quality of life on Bankastraat. Questions too, about the council’s policy for implementing the proposal made by the initiative takers.

Promises from the alderman came thick and fast, but he held to the central reservation solution for the transition from Aletta Jacobsweg to Bankastraat: it will form a simple but unsurpassable barrier and its effect on driving behaviour will be assessed after one year. The area around the fountain on Bankaplein will be extended by two metres so that traffic cannot race straight into the narrow section of Bankastraat.

The alderman is however blocking road markings along the whole length of Bankastraat to delineate cycle lanes. This brought an avalanche of questions from the Districts Committee members. Apparently the effect of similar markings on Frederik Hendriklaan has been negligible. So according to Smit this would not be the solution for Bankastraat either; even though scientific research suggests otherwise. The numerous Committee members who had flocked to the Community Centre have given the alderman plenty of extra homework to do before the city council meeting scheduled for 5 March, when a decision on the initiative will be taken.

The real litmus test however will be the wide section of Bankastraat. Initially the alderman swept aside almost all of the initiative’s proposals for a safer and more pleasant wide ‘Banka’: especially a central reservation along this section of Bankastraat, which he said would cause problems for the fire brigade and hamper the emergency services. Under pressure from the Districts Committee members, in particular Bart de Liefde who happens to be a local resident, and from initiative taker Willem van Gijn, the alderman, however, agreed to give the matter further consideration. Van Gijn argued for simple adjustments to improve road/traffic safety and the quality of life. He was quite rightly complimented for his lucid and professional presentation.

Afterwards everyone was satisfied, but a sense of uncertainty prevailed about whether the most important aspects of the proposal for a safer and better Bankastraat were yet within reach. According to the initiative takers the burgerinitiatief was “threatening to miscarry”, but thanks to all the questions put by the members of the City Districts Committee, the chances of a positive outcome are more likely. This we will know on 5 March, if the entire council committee rules on the citizen’s initiative.

A safer and more pleasant Bankastraat

A safer and more environmentally pleasant Bankastraat is the goal of a special working party made up of local Archipelbuurt residents. By means of a burgerinitiatief (remember the Riouwbrug!) they want to convince the city council to agree to the reorganization of Bankastraat. See proposal text below.

The working party expects to be able to collect the necessary minimum of 750 signatures required for their proposal during September. Every Hagenaar aged 14 and older can sign the petition.

Residents will visit as many homes in the district as possible to gather signatures. Petition forms can also be found in the Klokhuis Community Centre in case you are not at home when working party members call.

You can also download the form if you prefer so that you can ask your family and friends to sign too (NB: only residents of The Hague aged 14 and over are eligible to sign).

Please deliver the completed form to the Klokhuis (Celebesstraat 4) or send it to Willem van Gijn: Bankastraat 95 A, 2585 EJ Den Haag.

Explanation of proposal
Bankastraat has become increasingly dangerous for pedestrians, cyclists and other road users. The volume of traffic has intensified because motorists and delivery vans use the street as a short-cut route. And the wide expanse of asphalt encourages speeding and double parking.
Although visibility at the intersection with Aletta Jacobsweg / Kerkhoflaan / Bankastraat is poor this does not have the effect of making motorists reduce their speed. Several serious accidents sadly prove this point.
Bankastraat serves as the hub of the neighbourhood but is coming under increasing pressure because of the situation described above. The victims are the residents, retailers and pupils attending the Archipel School as well as visitors to the two local cemeteries who use the street on a daily basis.
The proposed measures will improve road safety both by reducing the volume and the speed of traffic. Not only will Bankastraat become safer but the quality of life on the street will improve, and will thus have a positive effect on the whole district, including the retailers.