The Hague municipal council is launching a trial in mid-April to reduce the problems caused by seagulls: namely, the noise, the ripped open bags of rubbish and the mess from their droppings. The nuisance cannot be completely eradicated but some of the measures will help.

As of 15 April inhabitants of The Hague can report problems caused by nesting seagulls. As part of the trial, instances reported by residents in Scheveningen, Escamp, Centrum and Haagse Hout will be dealt with by replacing the eggs – if the nests are accessible – with dummy eggs. This will hopefully reduce the nuisance caused as the birds will continue brooding the nest until it is too late to lay another clutch and the associated aggressive behaviour will subside.

Safety – Because the substitution of the eggs must be carried out carefully and with consideration for the welfare of the birds, the council has engaged the services of a specialist company with all the necessary equipment and expertise. The ministry of Ministry of Agriculture, Nature and Food Quality has granted an exemption from the Flora- en Faunawet (Wildlife and Countryside Act) in order to make the trial possible.

All reports are of value – The results from the trial in Scheveningen, Escamp, Centrum and Haagse Hout will be compared with reports received from other city districts in order to monitor the effectiveness of the measures taken. It is therefore important that inhabitants in the districts where no action is currently being taken also report any problems they are experiencing. The trial will be evaluated at the end of the summer.

Set of measures – The substitution of dummy eggs is part of a wider set of measures to tackle the nuisance caused by seagulls. The most important of these is to limit the amount of food available to the gulls. This is in great part down to the city’s citizens who can assume personal responsibility by not putting their rubbish bags out on the street any earlier than is really necessary: wait till 07.30 on the morning the refuge is to be collected. The less time the bags are on the streets the less chance the gulls and other animals will have to tear open the bags. Putting out food for birds and animals should also be curtailed once the winter is over.

Website – All necessary information on this subject as well as a form on which to report nests in the vicinity of your home can be found at <www.denhaag.nl> .

The Municipality of The Hague is to take extra measures next year to deal with the nuisance caused by seagulls. Profiting from lessons learned by the neighbouring city of Leiden, the Council will be making use of dummy eggs to fool the birds: they spend so long trying to hatch them that they have no time for a second brood.

Leiden has also had some success with a new kind of dustbin bag. These are not only made of stronger material, but are yellow – a colour apparently seagulls do not like. The city will also be installing a resident falconer, as soon as the Ministry of Agriculture gives permission.

Living near the sea has its problems

The Hague is close to the sea. You can tell by the bracing air and the seagulls. Something that many visitors to the city greatly appreciate.

But not everyone appreciates the herring gull (or the black-backed gull): all that screeching, scavenging and the droppings. Residents of Archipel & Willemspark too, complain about the noise and the mess. Yet the so-called gull problem is primarily man-made. The inhabitants of The Hague make their streets so inviting to the gulls: bread in the parks, litter on the streets, rubbish bags put out too early. It is all too easy to give these beautiful birds the blame; they are only following their instincts: finding food and taking care of their young. By reducing the amount of food left in public places, you reduce the number of gulls!

The Mallemolen’s makeover is finished, the new paving has transformed the street into an attractive esplanade. Removal of the paved sidewalk makes the street appear broader and allows the terraces to show to full advantage. Trees and attractive plant containers complete the picture. The street is a pedestrian area so no more cars or bicycles to disturb the diners. In short, the Mallemolen is ready for the summer, and for Queen’s Night/Day of course!

11 April 2009 – Once again we can marvel at the amazing show of blossom put on by the flowering pear trees in Balistraat.

According to Bas Steenks, coordinator of The Hague’s very own Nature Conservation Society AVN, the specimens in this tree stand vary in age but most are still pretty vigorous and with the right care will go on for a good while yet. It is an almost unique example of prime urban greenery. Well worth preserving such a beautiful street scene and replacing failing trees with the same species when the time comes.

11 December 2008 – Pledge for facelift received
The recycling containers on Burgemeester Patijnlaan will get a facelift in the new year. They will be repainted and the rubber seals will be replaced. New logos and signs will also be added. Unfortunately replacement of the old containers with new ones is not possible at the moment. This will be done in several separate phases but the exact schedule is not yet available.

3 December 2008 – Letter from A&W to the council’s Centrum district office
There are 6 containers located on the pavement on Patijnlaan: 2 new ones for textiles  and 4 old ones, 2 for waste paper and 2 for glass. The containers for paper and glass arrived here 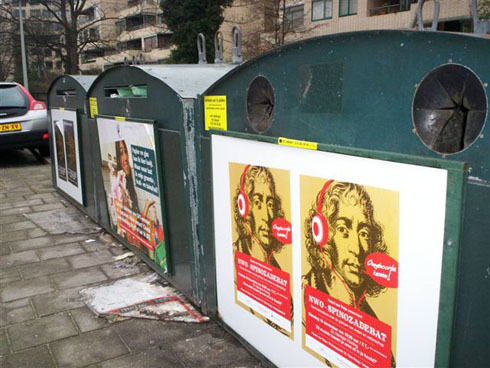 years ago after several re-locations in the neighbourhood. All were objected to but at least here there is plenty of space on the pavement and they can be emptied into the lorry without any problems. The A&W Residents Association approved this location and Couperusduin residents were assured that an attentive eye would be kept open for any problems.

The old containers are now in need of replacement; the rubber seals on the containers for recycling glass are split or have (on the side facing the ditch) completely disappeared.

Signs indicating the colour of the glass are also missing; all together a dirty, sorry mess. The pavement under and around the containers is filthy too; in spite of Couperusduin residents doing their best to clear up the worst of the litter (mostly other people’s).

Is it Patijnlaan’s turn for underground recycling containers? We have urged for this but in vain. Anyway a thorough facelift is certainly long overdue.

1 February 2008 – Alderman Bert van Alphen unveils the sculpture of the lamplighter by The Hague artist Loek Bos on the square at the entrance to the Schuddegeest and Mallemolen mews. The event marks the 150th anniversary of the 1854 Association, which owns the Schuddegeest mews, and the official opening of the renovated Mallemolen square.

Dec 2007 – The messy entrance area to the hofjes Schuddegeest and Mallemolen was recently repaved and transformed into a pleasant courtyard in which three trees will soon be planted. To complete the metamorphosis a sculpture by The Hague artist Loek Bos is also to be installed.

The 1854 Association owns the Schuddegeest mews and presented the city with an artwork to celebrate its 150th anniversary in 2004. They wanted the piece to encapsulate the trade of one of the residents to first live there. As well as coachmen, chimney sweeps and saddlemakers these included one or two lamplighters. In order to give an impression of what the sculpture will look like Loek Bos has made a photomontage.