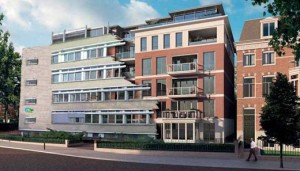 14 January 2012 – There was a last chance to see the view  during the Open Day before the demolition work begins in earnest.

11 November 2011 – Building permission for the construction of 17 apartments in Prinsevinkenpark on the site of the former LTO (Dutch Federation of Agricultural & Horticultural Organisations) building has been granted.

Consultation with two members of the public who had submitted objections to the plans has led to a number of adjustments to the design of the balconies, conservatories and bay windows. The roof awning on the top floor has been reduced in size and the modern railings have been replaced by the traditional ‘Prinsevinkenpark-hek’. Project developer De Prins van Archipel B.V. has announced that building work will start in January 2012.

The estate agents for the project, Frisia Makelaars and Nassauhuis Makelaardij, are now beginning the process of selling the last four apartments with a floor area of 109 to 215 m2.