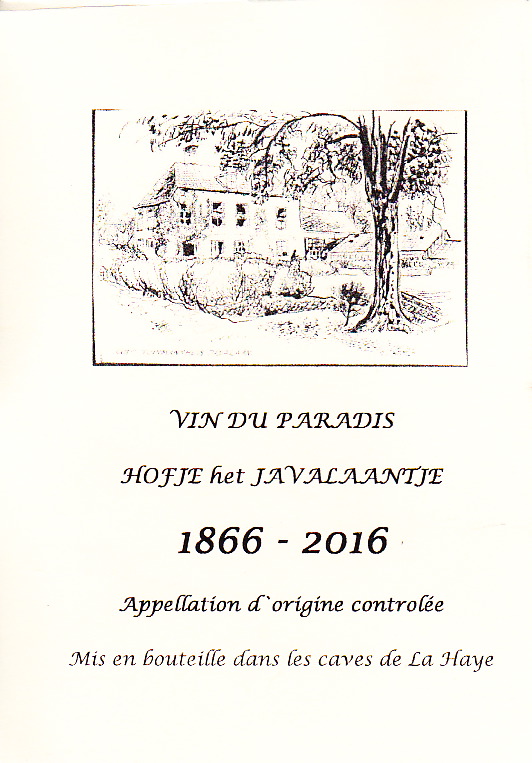 When I heard that Hofje Het Javalaantje existed 150 years I did not even know where it was. I found out that it is on a sidestreet of Javastraat; in fact its addresses are still Javastraat, but the name of Het Hofje (the almshouses) is “Het Javalaantje”.
The anniversary was celebrated by the occupants and former occupants, people who were born there or had stayed there with grandparents or aunts and uncles.

The festivities were opened by one of the occupants who called upon one of the descendants of the builder of the almshouses to speak. He told us that real estate developers had tried to buy the houses to pull them down and build an apartment building. It is good that that never happened. Het Javalaantje is an oasis of peace and quiet in a rather noisy setting.

Originally there were more houses, but they were very small: the basis was four by five metres with a small annex for a kitchen and a toilet. Upstairs was an attick; the slanting roof did not allow for much space. Today almost all the occupants live in two houses made into one and dormer windows make the atticks more spaceous. I was invited in in some of them and they are lovely dwellings.

The catering was perfect with coffee, tea and cake and lateron drinks and bites. And there was wine with Het Javalaantje on the label.
A book about the history of Het Javalaantje has been published. In one of the houses was a “family tree” of all the occupants who were known to have lived Het Javalaantje. In the course of the afternoon blank spaces were filled in.
All afternoon there was a happy crowd and a lively exchange of a wealth of information. The day ended in a big tent with a dinner for the residents.

It is worth while to go and have a look at this well-kept 150 year old part of our neighbourhood. Some photographs you can see  hier