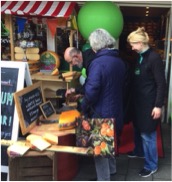 This was celebrated exuberantly on Saturday 31 March. Almost nobody knows what the surname is of Annelies; everyone knows her as Annelies. The green balloons in the street were not for Easter, but for the party and the colors Alexanderhoeve. Music was made outside the shop and both cheese and wine could be tasted. You could earn a piece of cheese by cutting off a piece of 500 grams. A margin of 5% was used, but that was not so easy. The party place is busy and Annelies has received positive compliments and is spoiled with flowers.

Annelies worked at Albert Heijn during her study time and since she did not see that much in office work it seemed nice to have a store. She came to Zuivelland as a substitute and traveled a large part of the country to observe the situation where necessary. More than ten years ago, besides baker Van Aalst, there was a cheese farmer and Annelies actually started the work in this district. The owner of this business wanted to retire slowly and she took over the business. When the ABNAMRO bank stopped the branch in the Bankastraat, it took the building into use and the store is still there.

She likes the work, she knows many of her customers and often their preferences for cheese varieties. She says “Customers are people who come to visit in the store”. The transition from Zuivelland to Alexanderhoeve took place because Dairy land stopped. Independent entrepreneurs are affiliated to the Alexanderhoeve who have a joint purchase

to have. It is nice to see in the shop how many types of cheese there are, both Dutch species and species that come from abroad. Yet there are still many tasty cheeses abroad that have not yet been discovered by the Dutch.

In the store you can also find nuts and snacks in addition to cheese. Also wines and beers are good to combine with cheese. Special is that the beers in the store come from local brewers, so beers in The Hague; good to know!

These ten years have passed quickly for Annelies and she also feels “senang” here, just to give it an expression from the Archipelago of emerald. She has the best customers and she hopes to continue for a long time.