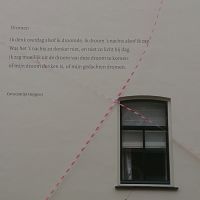 On Saturday 28 March 2015 the eighth wall poem was unveiled on the corner of Atjehstraat and Bankastraat. The residents chose the poem ‘Dromen’ (dreams) by Constantijn Huygens (1596-1687). Roughly translated it reads: ‘In the daytime I think as if I dreamed, in the night I dream as if I saw; when night were not so dark, nor day so light, it would be hard to wake up from this dream: whether my dream is thinking or my thinking dreaming.’

Huygens was a scientist, diplomat, architect and composer of music, who moved in the highest circles of the 17th century Dutch Republic, an eminent citizen of the Dutch Golden Age. His poetry and other literary work, known for its complex and inventive usage of language, was to him a mere pastime.