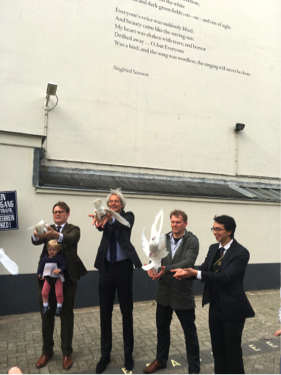 The unveiling of ArchipelpoëZie’s eleventh wall-poem on Saturday 21 May 2016 began with a concert by Heleen van der Weel, carilloneur  of the Peace Palace. The Sun broke through the clouds while the sound of the bells tumbled over the heads of the listeners.
The new wall-poem is on the side-wall of the house on Burgemeester van Karnebeeklaan 3. ArchipelpoëZie wanted a suitable poem for this location that is so close to the Peace Palace and the spot where Kunstzaal Kleykamp used to be. The choise fell on Everyone Sang, written by the British poet Siegfried Sassoon after the end of the first World War. Sassoon enlisted in the British army in 1914. Everyone Sang can be read as a poem about the ending of the war, as a celebration of peace, or – as Sassoon said – as a vision of a better world with equality and justice for all.
Special guests were  Mr Joris Wijsmuller, Alderman for Urban Development, Housing, Sustainability, Culture and Heritage; Mr Nick Heath, Subsidiary Chef du Poste at the British Embassy; Mr Jeroen Vervliet, Director Librarian of the Peace Palace; and Mr Bert Kepel, President of the Haagse Studenten Vereeniging.
Alderman Wijsmuller said that the wall-poems are a contribution to The Hague as a literairy city.
Mr Jeroen Vervliet pointed out that the Peace Palace was founded in 1913 to give shape to pacifism, internationalism and faith in Peace by Justice. The Great War destroyed this illusion of peace. Vervliet recalled how 1 million refugees found a safe haven in The Netherlands with its population of about 7 million inhabitants. “For the millions of victims of wars we play the Peace carillon”, said Vervliet, “Let us think of peace, hope for peace, every time we hear it. And let us be open to our physical environment, be inspired by what us reminds of peace – such as the iconic Peace Palace and the work of the war poet Siegfried Sassoon.”
Mr Nick Heath then recited Everyone Sang in a most impressive way.
At the end of the ceremony the four speakers let loose white pigeons – a reference to the birds in Sassoon’s poem and as a symbol of peace.