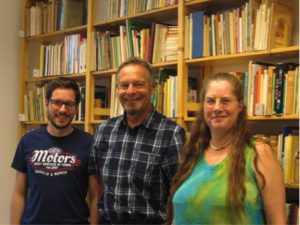 Maybe it is not commonly known in the Archipel that behind the front door of Riouwstraat 172 the Internationaal Esperanto Instituut is housed. I spoke here with the members of the Board, Saskia Veen and Bert de Wit and with Pawel, the originally Polish staff member who regularly helps out.

I said that in my view Esperanto as a world language has not been a success, but Bert hastened to weaken that statement: the aim of Esperanto is to improve the communication between people with different languages and cultures. Esperanto is now spoken in more than 120 countries by about 2 million speakers. The Esperanto version of Duolingo, an app for studying languages, has since it was launched reached one million students.

Esperanto was devised by Lejzer Zamenhof from Poland, who was looking for a solution for the differences between the various communities (Poles, Russians, Germans and Jews) in his neighbourhood: to speak one common language. In 1887 he published under the pseudonym Dr Esperanto (somebody who has hope) the first book about the language titled  La Internacia Lingvo (the international language). The language became known under his pseudonym and thus was given the name “Esperanto”.

Esperanto was created to help people from different cultures to communicate with each other. Its simple grammar makes it easier to learn than any other foreign language. Moreover it is politically neutral so that one can communicate on an equal footing. The aim of Esperanto is not to suppress or replace other languages, but to connect different cultures and languages.
There is an international travel network (Pasporta Servo) that enables Esperanto speakers to travel inexpensively and comfortably and visit other Esperanto speakers all over the world. This way one can get acquainted with the culture and customs of a country and its inhabitants via the people themselves.

The Instituut was founded in 1930 by Andreo Cseh, a priest of Hungarian-Romanian descent. Together with Julia Isbrucker he made it into an important training college for teachers of Esperanto. He worked with the “direct” training method that teaches the language without using the mother language. Recently IEI developed an app with the direct method for the mobile phone.

“It is our aim” Bert said, “to promote the use of the language as an international means of communication and that is why we try to spread knowledge about it and promote its being taught. We do that by training teachers, giving courses, collecting books and making them available and organising monthly meetings where we discuss books written in Esperanto (and sometimes translations). We have a library with a great number of books that were translated into Esperanto or written in that language.”

When I asked why they had studied Esperanto Saskia answered that she was more or less brought up in it. Both her parents spoke it, but they also wanted her to learn  good Dutch. “They took her me to congresses and soon I began to understand what people were talking about.” Bert told me that during his study of biology the  “revolution of 1968”, when young people all over the world clamoured for a more democratic society, made him decide to study Esperanto, a “common” language that enabled everybody to communicate on an equal footing. To him that seemed to be ideal.

Are you interested to know more about Esperanto?
The institute can be reached at tel.nr.  070 – 3556677  or via email  iesperanto@versatel.nl