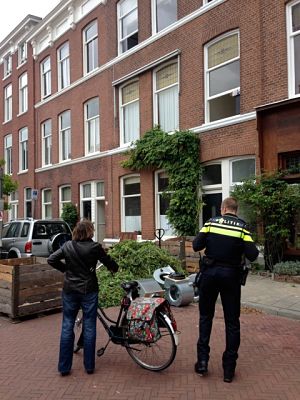 Monday 6 October at 8.10 am a hemp plantation in a house on Atjehstraat was rounded up. On the 2nd floor and in the attic  about 1600 hempplants were found. They have been destroyed, as were the assimilation lamps and ventilators. Electricity was tapped illegally. A suspect was arrested in a house in Voorburg.

Opportunity makes the thief. Walking down a street a potential burglar may spot a frontdoor of poor quality. See to it that you have a good quality lock (Politie Keurmerk Veilig Wonen): the cylinder must not jut out and you can add a second safety lock. Metal safety strips and plates should have no screws on the outside of the door or doorpost. A chink between door and doorpost should be closed off with a full length security strip. Install a lock on small ventilation windows.

When you leave the house, leave a light on. A dark house attracts more attention than a house that is lit up.

8 October, around 2.20 am, there was a burglary into a shop on Frederikstraat. A hole had been made in the shop window. Two man ran away. One was arrested about 10 metres down the street, crouching in a shop portico: a 40 year old Greek of no fixed abode.  The other suspect was not found. One week earlier there had been a burglary, then a large number of cigarettes was stolen.

Tuesday 7 October, around 10.50 am, there was a speed check at Prof. B.M.Teldersweg near Verhuelweg. A passenger car, driving at a speed of 80 km where 50 km is allowed, was fined for speeding. The 36 year old driver’s behaviour was aggressive.  When he drove away he gave the police officers the finger. The officers set off in pursuit and forced the car to stop near tennispark De Bataaf. The driver was taken to Police Station Karnebeek, where he was questioned. He got a ticket of € 250 for offence, the speeding ticket was € 260.
The driver had his 2 year old daughter with him in the car; the little girl was handed over to her grandmother. Grandmother and grandchild were taken home. Later in the day the driver was allowed to go home.