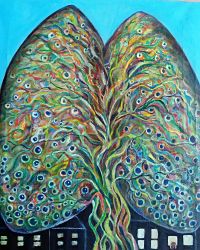 There are 23 works with the theme ‘Waakse’, growth and development in her Frisian mother tongue. Etchings and colorful paintings show that growth is possible everywhere. Gryts demonstrates the importance of CO2 capture for our lungs and the usefulness of greenery to combat heat stress in the stony city. As a kind of “building doctor”, she designs cheerful, green solutions for dull squares, roofs and facades that make them more attractive, offer a healthier living environment and give rise to discussions about nature conservation and sustainability.

Gryts paints commissioned portraits. A Surinamese in party dress, a singer from Tenerife, two Asian women and King W.A. as a bubble-blowing cub, with which she won a prize in the Codamuseum in Apeldoorn. The portraits are about the influence of an attribute, such as a hat, on the expression of the subjects portrayed? Does it give a sense of power, protection, social cohesion or presentation in a certain role?

The Klokhuis is open Monday through Thursday from 9 a.m. to 4 p.m. and Friday from 9 a.m. to 1 p.m. The room where Gryts hangs much of her work is then often occupied. That is why Het Klokhuis is also open on Sunday 26 May from 5 to 6.30 p.m. Around 5.30 pm there is a walk-in concert where Rob Maas sings Argentinian tangos, accompanied by Gerard van Duinen (bandoneon) and Franz Profittlich (piano). Gryts graduated in 2004 from the Royal Academy of Art in The Hague.