He became chairman in September 1987 after serving five years as secretary, succeeding Eduard Vermeulen. Alex had recently left our neighbourhood, moving to Groningen with his wife Louise. Unfortunately, he was able to enjoy the quieter surroundings there for only a short time.

We sorely mourn the loss of Alex and owe him a debt of gratitude for all the work he did in our neighbourhood.

On behalf of the A&W board,
Auke Bloembergen (board member)

Alex Philipse was instrumental in curbing the effects of the expansion plans for Madurodam park (miniature city) in the late 1980s. He enlisted my help as a lawyer living in the Archipelbuurt to oppose the expansion, which would mean sacrificing all the wooded area stretching from the then De Bataaf tennis park to the Waterpartij (where the the Indisch Monument is located on the Professor B.M. Teldersweg) to accommodate extensions to the park and its parking facilities. The majority of the City Council supported the plan and it seemed like we were fighting a rearguard action. 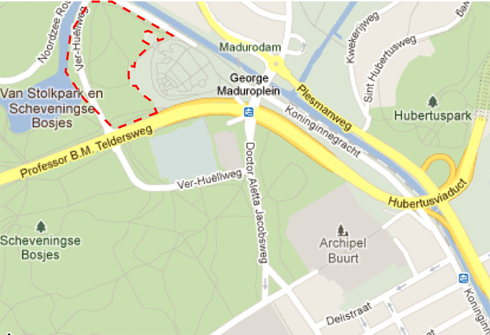 Alex’s prudence and amiability were vital in all the lobbying work among the so-called ‘opposition’ and the mobilisation of fellow residents with clout to support A&W’s opposition to council plans. Eventually, the vote in the council was reversed.

It was Alex who also asked me, and architect Guido de Sturler, to set up the working group Urban Planning. His approach was to invite the architects involved in all sorts of building projects in our district for discussions at a very early stage in the process. The meetings were often very ‘lively’ and Alex referred to them as ‘cross-fertilisation’ exercises. He sought common ground for conflicting opinions and interests. He asked Guido de Sturler to make a study of what constituted the ‘harmony’ in the façades on the streets of the Archipelwijk and rewrote the technical story for a wider audience. They produced a publication featuring this analysis of the structure of a typical Archipel façade.

After stepping down from the A&W board, Alex devoted his time to helping foreign music students. He counselled them and organised concerts and recordings for them. He held concerts in his home on upper Bankastraat, which he organised with his pianist wife Louise.

He had all the traits of a perfect ‘archipel resident’.

Wendela van Beuningen told us that it was Alex’s idea to take up the call once again to reinstall a fountain on Bankaplein. Together with, among others, Wendela (finances) and Joost van Iersel (liaison with council and building directorate) this was realised in 1988.

Ank Beekman (former board secretary and now contact person for the Dutch-language website) adds that right up until his death Alex remained interested in the fortunes of A&W. He subscribed to the website’s newsletter in order to keep abreast of what was going on and continued to respond to news items.

Else Ponsen (former secretarial support) remembers Alex as a sociable, uniting and affable chairman. He ran his own assurance business and often sighed, ‘Else, it’s getting a bit too much for me.’ I would answer that I understood (but hoped that he would be able to cope for a long time yet). He was married to Louise Aafjes and they played piano together. Alex even once played during the curtain raiser to the North Sea Jazz Festival. In those days he also played locally on Bankaplein, in the library on Sophialaan (ed. now long gone) and in the first Bofill building: the Borneoflat, in the senior citizens meeting place Het Schakelpunt.