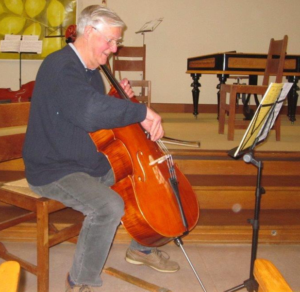 On Wednesday, November 14, 2018, family, (music) friends and neighbors in the Ockenburgh crematorium said goodbye to Jaap in large numbers.

Jaap was an involved neighborhood resident. Jaap was of great importance to the website of Archipel & Willemspark. At the start in 2004, Jaap worked mainly on technology in the small editors. The substantive issues were filled in by others. In addition to the Dutch edition, there was also an English edition, provided by Linda Nash. The guiding principle for the content of the articles was: information from and for the neighborhood. And that in an attractive way, generously provided with illustrations. Jaap has worked for more than ten years in the editing of the website.

The website was not his only hobby. Music was important to him. Jaap played meritorious cello and participated in performances of amateur companies. He was also heard during the Open Podium in the neighborhood.

In many ways Jaap and Eva Drijver (the neighborhood newspaper!) Were involved in our neighborhood. We are going to miss Jaap and wish Eva a lot of strength.