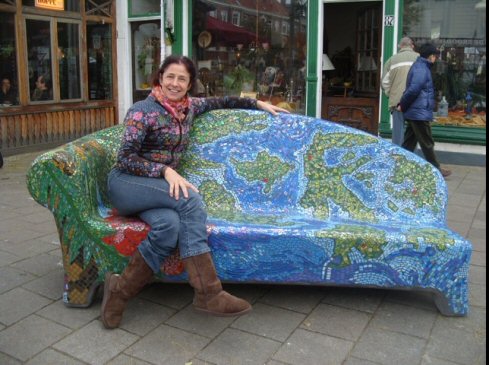 Irene Vonck is the designer of our beautiful and colourful social sofa on Bankastraat.

Ideal spot
She was really excited about having found the ideal premises on the corner of Billitonstraat and Borneostraat: a house with a separate studio which she recently moved into full of atmosphere. The light floods into the studio from all sides and it faces south. Wonderful… and to think that a year ago the place was full of bicycles! It’s also fortuitous that she’s located opposite Niels, who sells all sorts of second-hand articles. Customers are always coming and going; very inspiring, and she even found a couple of lovely convent benches there.

She’d been looking for living accommodation with studio attached (not in the house) in the Archipelbuurt for a while; not easy to find. “It was quite by chance. Previously a bric à brac shop, and before that a business selling and repairing bikes.” She has two enormous cellars too and discovered a small storehouse on the groundfloor, which she has transformed into three bedrooms, each with en-suite bathroom. It was originally a wine importers, hence the cellars and the street-door into the studio designed to resemble a wine vat. She is justifiably proud of the window awnings installed on the outside of the studio, “It’s funny but they make the studio seem bigger.”

Workshops & courses
Irene holds workshops and courses in decorative painting techniques in her studio. Too numerous to list here but to name just a few: stenciling, colour washing, sponging, crackle varnishing, fresco painting and trompe l’oeil. She also gives advice on colour and styling and can teach you to draw house plans to scale for example so that you can redesign your interior. She likes to focus on English-speaking women in The Hague because in her experience they have more spare time to follow courses.

Expat past
Irene was born in Dublin in 1952 and later grew up in England in London. She went to Falmouth School of Art in Devon and then went to Brighton where she studied interior design in the early 70s. In 1973, she made the switch to Amsterdam and decided to devote her herself to ceramics and glass making at the Rietveld Academy. After graduating she became a ceramic artist practicing the art for more than thirty years. A great quantity of clay has passed through her hands and been transformed into artworks. Her pieces can be seen in many museums here and abroad. The Stedelijk Museum in Amsterdam has a large number of her works in its collection. The one drawback is that clay itself is not particularly colourful; this has to be added during the latter stages of the process.

Colour is her passion
Colour is her passion. It’s no coincidence that her studio is called “Colour magic”. Colour has a great influence on people. “We have an extremely strong relationship with colour. Different colours convey different things. Pale blue and green are soothing for example whereas red is the colour of passion. Yellow is sunny and cheerful and pink gives a sense of well-being and warmth. Orange is hot and lively.” Irene loves warm colours.

After thirty years, Irene has literally thrown open the doors of her studio and everyone is welcome. She gives drawing and painting lessons specially for children. It’s a combination of learning techniques and professional draughtsmanship, and slowly developing a feel for perspective and above all learning to “see”. It involves the more serious aspects of technique which she combines with more natural elements that can stem from the seasons. “And in particular letting children use their imagination.” Incidentally, she conducts the lessons in English as well as Dutch, as many English-speaking children follow her courses.

Big children are welcome
She also organises children’s parties in her studio. The birthday boy or girl chooses a favourite theme (mermaids or princesses or cowboys or …) and after the party all the guests can take their “creations” home. A local resident even celebrated his 70th birthday in the studio with his family. A very enjoyable event altogether. So big children too can go to Irene’s to celebrate a birthday creatively!