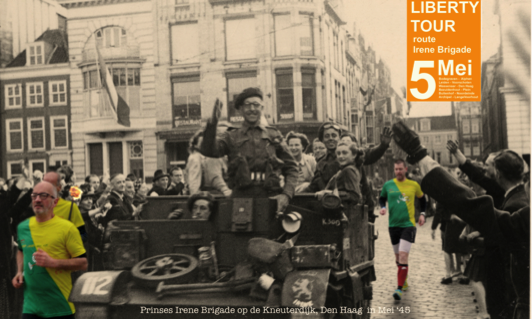 The Liberty Tour
In the night of 4 to 5 May runners from The Hague will bring the Liberation Flame in a relay race from Hotel De Wereld in Wageningen to the Malieveld in The Hague. A mark of honour to the Prinses Irene Brigade who travelled that route (126,5 km)  together with the Canadian allies to free The Hague in May 1945. They will be accompanied by 40 keep-them-rolling militairy vehicles that date back from WW II. The Liberation Tour will  reach the Peace Palace on Thursday 5 May at about 13.30 hrs.

The Liberty Tour will stop at Bodegraven, Alphen aan de Rijn, Leiden, Voorschoten and Wassenaar where runners from these towns will hand the Liberation Flame to their Mayors.

In The Hague they will make halt at the Grote Kerk, at the plaque that commemorates the entry of the Prinses Irene Brigade in 1945. The tour ends at the Malieveld where the Liberation Fire will be lit in the presence of Mayor Van Aartsen during the opening of the Liberation Festival.

For more information (in Dutch):  www.route-irenebrigade.nl