The New Year’s reception on 8 January 2017 was well attended and friends and neighbours wished each other a beautiful year.
There was an abundance of tasty drinks and bites and orchestra “Otto Voces” played both classical music and modern songs.

Robert van Moorsel, chairman of the Community Organisation made a speech about the weal and woe in our neighbourhood and he 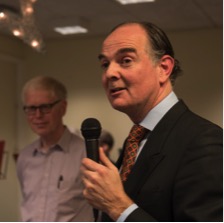 toasted to the new year. He awarded Guus Nieuwenhuys and Time Dike the Ereprijs 2016 to thank them for their good work in the working group Traffic. Unfortunately both gentlemen were absent. 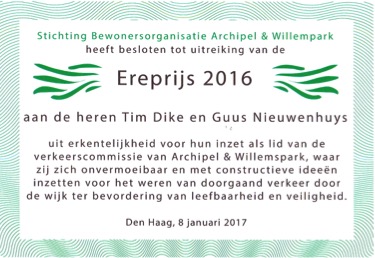 Ruth van Rossum (working group Poetry on the Wall) spoke about the poems that were put up recently and the response of some of the passers-by. She described the procedure of selecting the wall – with the owner’s permission -, the permission of the authorities, the choice of the lettering, etc.
After the speeches there was ample time for a nice chat.

Merel Kolfschoten took a series of pictures; you can see them  hier .