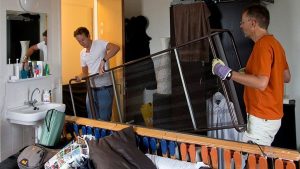 A large majority in the city council supports a proposal from ChristenUnie / SGP, the VVD of The Hague, Hart voor Den Haag and GroenLinks. “The almost unlimited splitting up of houses in small booths in the often already crowded neighbourhoods should be over once,” the parties say.

Politicians have long been concerned about splitting homes into independent units and housing them. Many parties have recently pointed out this because the quality of life – especially  in the somewhat older neighbourhoods – will be under pressure.

Partly for this reason, at the end of March, councilor Martijn Balster (PvdA, housing) announced that it is forbidden to change rooms in ten neighborhoods.

But the city council does not go far enough. The parties are disappointed in Balster and now come up with their own proposal: preferably immediately, but at the latest within two weeks, a stop at a cure throughout the city. One of the reasons for extending the measure is that the parties fear a waterbed effect. They think that now that dividing homes into self-contained units is forbidden in some neighborhoods, it will increase in others. More can be read on the site of Omroep West.