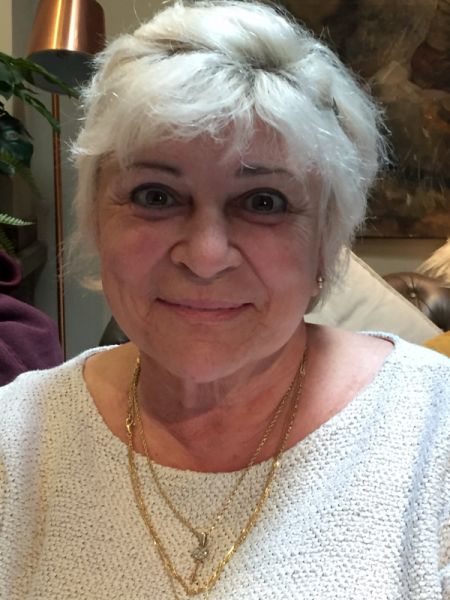 This time I had a nice conversation with my “colleague” Patti in a coffee cafe in the Frederikstraat, her familiar neighborhood.

Patti is responsible for the English version of our website and that’s why I wanted to put her in the spotlight and give her “a face”.

“I was born in South Bend, Indiana, and raised in Ann Arbor, Michigan,” she reported. I come from a family with two younger brothers and they still live in the US, as does my 89-year-old mother.

I was allowed to ask the questions in Dutch (she already understands it quite well) but she still wanted to answer me in her mother tongue. When she started to tell me, in her quick English, what she’d been up to, I could barely keep up.
A bachelor’s degree in Psychology, a master’s degree in Information Resources and an “advanced degree” in Court Stenography. “My work as a court stenographer was truly fantastic. I had to report many different lawsuits,” she said. That made it not only very varied but also very interesting. The discussions between the judges, lawyers and the witness, which were not only very fast but often also somewhat chaotic, had to be noted “literally” and that requires some dexterity.

“I also had my own company,” she said, “and I did a lot of subtitling [closed captioning] for TV programs. My favorite program was sports, especially basketball. I did that for no less than 35 years.”

“5 years ago I came to the Netherlands. As a 16-year-old I had been in Germany for a few months through a student exchange program and then I knew that I wanted to live in Europe one day.  My father is Italian and Dutch friends of mine advised me to come to the Netherlands to apply for my Italian residence permit from here. Before this I also lived in Italy for a year.  Now I have succeeded and I am not only an official resident of Italy but also a European! I regularly go to Italy.”

When I asked how she got to the website, she replied that a friend had read an advertisement in the Wijkkrant that they were looking for someone for the English-language website. “I then sent an email to Cristo (Padmos) and could start immediately.
I also immediately started at Kickstart, at the Laan Copes van Cattenburch, with Dutch lessons, but now I mainly follow Italian lessons, I must confess.”

I am also a member of the American Women’s Club, which focuses on charities and support for American expats in the Netherlands, among other things.
There I now regularly play “pickleball” to which I have become somewhat addicted. It is a combination of tennis, badminton and table tennis. You play it with a paddle and a plastic ball with holes that is larger than a tennis ball.  She then proudly announced that it might become an Olympic Sport!

“I love Europe, wanted to live in Europe and now ‘I am living my dream’”!