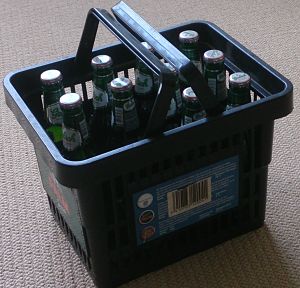 Some years ago I bought at my liquor store a light-weight mini crate that carries 12 bottles of beer. Every fortnight I took that handy help to the store  to stock up my supply of delicious beers: Gulpener, the ‘what’s-its-name’ German beer, ‘the queen of beers’, Murphy’s and Irish Red. But the liquor store re-organized and Murphy’s had to go. The store moved into another shop-building and beers were banned altogether. I suppose you know which liquor store I mean (I am no longer a client).