The minutes of the 16th meeting of the Hague City Council, held on Tuesday 17 May 1881 include an item headed ‘naming of a new street’. It records that the chairman, Burgomaster (mayor) F.G.H. Gevers Deijnoot, informed the council that the new street running from the Schelpkade to Frederikstraat, parallel to Mauritskade, was to be known as Prinses Mariestraat. So who exactly was Princess Marie?

Princess Marie (Wilhelmina Frederika Anna Elisabeth Maria, Princess of Oranje-Nassau) was a daughter of Prince Frederik (brother of Willem II) and his wife, Louisa of Prussia. She was born on 5 July 1841 on the De Pauw country estate in Wassenaar and was her parents’ fourth child. As a small child, she played with her brother Frederik, who was 5 years older. However, he died when he was only 10. Her sister Louise was then aged 18. Marie was brought up by governesses, although she appeared in society with her parents and accompanied them on their travels.

Marriage and right of succession
Although marriage to the Prince of Wales (later King Edward VII) was considered, it was a German Count, Wilhelm Adolph Maximiliaan Carel Von Wied, whom Princess Marie eventually married on 18 July 1871, at the age of 30. The wedding took place at the village church in Wassenaar.

The young couple set up house in his ancestral home in Neuwied, but frequently returned to the Netherlands to visit Princess Marie’s father at De Pauw. By that time, he was a widower and she was his only surviving child. Moreover, Princess Marie retained her right of succession to the Dutch throne after her marriage. This meant that her husband Wilhelm was expected to learn to speak Dutch and to familiarise himself with Dutch culture.

Wilhelm eventually died in 1907. Princess Marie outlived him by three years and was the only surviving princess of Oranje to attend the christening of Princess (later Queen) Juliana in 1909. She died on 22 June 1910 at Monrepos, Amt Heddersdorf (Germany). Her descendents, the Von Wieds, continued to regard themselves as candidates for the Dutch throne and her second son was actually King of Albania for a few months in 1914. Their frequent visits to Wassenaar and The Hague made them well known figures in the locality and indeed quite popular, but in 1922 they lost their claim to the Dutch throne when a law was passed confining the right of succession to descendents of Queen Wilhelmina (grandmother of the present queen).

(For an unexpectedly racy version of the story,
visit http://flagspot.net/flags/nl-royal.html#mw)

From a project report on the listing of Hague historic buildings from the1850-1940 period: 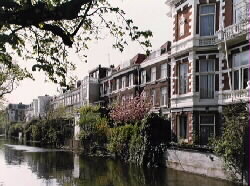 “The buildings on the even-numbered side of Prinses Mariestraat, backing onto the Mauritskade canal, are very remarkable. Due to their prominent position, unusual attention was paid to the rear elevations of these properties. Some of them display cornices with carved consoles and moulded window surrounds. The quality of an 1883 Neo-Renaissance style property built onto the back wall of number 6 actually exceeds that of the Prinses Mariestraat frontage.”

The copious ornamental plasterwork on the building directly opposite number 6, on the odd-numbered side of Prinses Mariestraat, is also worth a look.

This text may not be used or reproduced in any publication or other form of media without prior permission.
Contact website-international@archipelwillemspark.nl