The name Prinsevinkenpark translates literally as “Princes’ Finching Park”. It commemorates the fact that the area once belonged to the Princes of Orange, who used it as a vinkenbaan: a place to net finches. In the 17th and 18th centuries, this was a popular pastime among the elite. They set up nets in the wooded areas fringing the dunes and caged finches were positioned round about to attract wild birds by their singing. The caged birds were blinded to improve their song. The sound of their singing attracted flocks of thousands of wild finches, which passed through the area every autumn on their migration from Scandinavia to Great Britain and Ireland. A quick tug on a cord brought the net down over the flock. In 1848, D. Ruygrok opened a simple café next to the vinkenbaan and called it the Prinse Vinkenhuis. It became a popular rendezvous of painters and poets.

In 1886, W.B. van Liefland produced a spacious design for a new group of villas on the land. The oval lay-out was in strong contrast to the rectangular grid pattern of the rest of the neighbourhood. On 22 January 1886, the first trees were felled to make way for the houses. The area acquired its present name in 1888. It was the last new area of building in Duinweide, as the entire Archipelbuurt was then known. (Translated from: De Archipel een buurt in druk, 2nd edition, 1979, with extra details from I. Matthey, ‘De vinkenbanen van de Hollandse buitenplaatsen’, Historisch geografisch tijdschrift 22 (2004) 1 – 9). 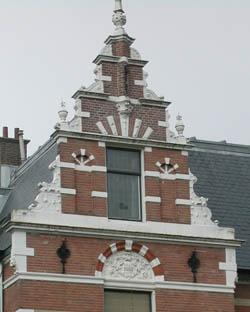 Most of the houses have richly decorated Neo-Renaissance style gables designed by various well-known architects of the day, such as J.J. van Nieukerken and Z. Hoek. However, some of them were built only in the 20th century. For example, number 42 was designed in 1913 by H.P. Berlage (architect of the Gemeentemuseum and the Amsterdam stock exchange now known as the ‘Beurs van Berlage’) and displays his rationalist style. Number 2, formerly the offices of Uitgeverij Succes and now converted to apartments, is another 20th-century addition, as are the offices of the Dutch Federation of Agricultural and Horticultural Organisations (Land- en Tuinbouw Organisatie or LTO). The latter sticks out like a sore thumb, though the later extension (built in 1986) is rather more sympathetic in style (see LTO below).

A resident of the Prinsenvinkenpark who enjoyed a great deal of local fame was Dirk Bus (1907-1978). On his 70th birthday (5-12-1977) he was decorated by the municipality for his services to the city, not only as chairman of Pulchri but also as the artist responsible for a number of war memorials and sculptures on public display around the city. These include the monument to the grenadiers and chasseurs beside Zorgvliet park (opposite Sorghvliet Lyceum), the war memorial in the Algemene Begraafplaats (the non-denominational cemetery on the right at the top of the Bankastraat) and the sculptures that used to adorn the old town hall on Burg. Monchyplein (now demolished) and now grace the new housing development on the site.

Jaaaaa, dit is Bèèèrt” I hear on the voice mail. Bert Huisman is a busy bee and hard to catch at home! He’s usually away wandering the area on neighbourhood business, walking in the Scheveningen Woods with his dog Matilde (a light brown, long-haired Briard), or singing and playing in a pop band, together with friend Koos from the Exotenhof greengrocery store – and that’s when he’s not on one of his regular jaunts to France. And soon Bert will have vanished entirely from number 42, though he’s not going far: he’s just bought the smaller house next door at number 40 and his own house is on the market as I write. 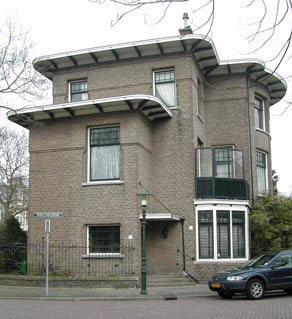 When I finally track him down, I get to talk to Bert in his attractive sun lounge or serre with its view out onto the garden and walls decorated with splendid Indian headdresses. It’s just one of the seventeen rooms available to him. The house was christened ‘Nieuw Parkwijck’ by its original occupant, a publisher called Simons, after his former home, ‘Parkwijck’, in Amsterdam. It dates from 1916 and was the last house to be built in the central ‘island’ area of the Prinsevinkenpark; the first was built in 1888. Originally, there was just one country house occupying the whole area. Number 42 was designed and built by Berlage. Its rounded frontage and projecting flat roofs betray the influence of the famous American architect Frank Lloyd Wright, while the interior is in the original – art deco – style.

Bert clearly has a sense of style and history. He looks after the large French-style garden himself. And he has many stories to tell of the history and background of the houses in the area, including some intriguing gossip about the people who lived in them. Everyone knows the house that was once occupied by two inhabitants, one of whom murdered the other in the course of a fight. And the best-known call girl in the Hague once lived in the Prinsevinkenpark. Indeed, it’s even rumoured that Bert’s own house was once a brothel! More concrete evidence of scandal is provided by the names of former occupants scratched into the cement under his front porch, including Panzer Grenadiers of the SS!

Bert himself came to live in the Prinsevinkenpark in 1953. His father was an eye, ear, nose and throat specialist with a practice based at number 1, where his brother now lives. His mother still lives nearby at number 32. Originally, Bert had a career in education, teaching at a fashion college where he himself learnt tailoring. These days, he’s involved in all sorts of voluntary work – everything from keeping the Scheveningen woods properly maintained and free of condoms to campaigning for a Hague Pop Museum. (He does nothing to conceal his abhorrence of the neighbourhood carbuncle, the modern LTO building, or of the way certain new-comers make changes to their newly acquired homes.)

At the end of our talk, Bert is keen to stress that – despite the rather grand appearance of the area – most of the occupants are really just “perfectly ordinary” folk. Even if, as he admits, the population has changed a bit in recent years as more yuppies, with or without kids, replace the older couples and single people (often artists) who used to predominate. But then what’s “ordinary” in the eyes of someone with so little that’s ordinary about him, other than his name

Prinsevinkenpark, smart but not stuck-up

Tucked away between Riouwstraat and Ary van der Spuyweg, the Prinsevinkenpark is a little-known corner of The Hague. But it would be hard to find a classier address. No surprise, then, that one of the most impeccable Dutch government ministers of all time, Onno Ruding, has decided to make his home there, in one of the flats into which the former offices of Uitgeverij Succes (famous for its diaries) are currently being converted.

As a stranger wandering into the Prinsevinkenpark, it’s easy to get confused: should you turn left or go straight on? You can quickly lose your sense of direction, for this is a street that revolves around the island at its heart and forms a miniature world in itself. The houses are tall and distinguished, displaying copious 19th-century ornamentation. They are sizeable properties, but their gardens are oddly small. That’s inevitable, given the way they are grouped around the central island.

Among them is an early Berlage design: already displaying the distinctive style of his later years, it is a compact detached house with small windows in an otherwise unbroken brick façade. Apparently, the house is for sale. It can be yours tomorrow if you’ve a million or so to spare. But there’s also a building here that nobody would give tuppence for: the headquarters of the Dutch Federation of Agricultural and Horticultural Organisations (Land- en Tuinbouw Organisatie or LTO). Unimaginative modern shoebox meets stylish turn-of-the-century architecture, with disastrous results! 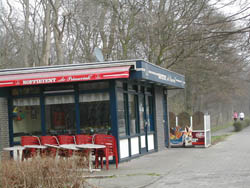 At nearby coffee cabin ‘De Prinsevink’, proprietor Frank van der Valk has a juicy tale to tell about a murder committed in one of the Prinsevinkenpark houses in the late eighties. Apparently, a chap called Wim joined forces with a mate of his and the latter’s girl-friend to buy a substantial house in the Prinsevinkenpark for the (even then) paltry sum of 140,000 guilders. Clearly a shady deal, ask no more. The house needed a lot of work on it and things moved slowly. Meanwhile, the friendship between Wim and his co-owners cooled off considerably. They began to have rows. One day, things boiled over and Wim’s mate grabbed a carving knife. Self-defence, he said. Maybe it was all a misunderstanding. But, anyway, Wim was a goner…

If you want to hear the story first-hand, drop in and buy a cup of coffee from Frank and his wife Maryam. While you’re at it, there’s a good chance you’ll get into conversation with one of the present residents of the Prinsevinkenpark or surrounding area. That’s the nice thing about ‘De Prinsevink’: it must be the most democratic place to have a cup of coffee in The Hague – a place where the widow of a senior naval officer can sit happily elbow to elbow with the construction workers and tradesmen who drop in on their daily round. Like Rinus Wijnvoord, a leading local specialist in glass maintenance, though he won’t mind a bit if you call him a window-cleaner.

The houses may be impressive, but here and there the gardens are unexpectedly cramped. The owners are compensated by the generous width of the street. The magnificent focal point is a splendid sycamore tree, which stands at the heart of the Prinsenvinkenpark like a solitary policeman directing the traffic. Peering up into the heavy branches, you can just make out the iron cables binding them together. They were put there by the municipality in the 1970s, to prevent the branches tearing away from the trunk under the weight of their own foliage. Old sycamores can be identified from their smooth, almost white trunks and flaky bark. This one is now more than a century old. 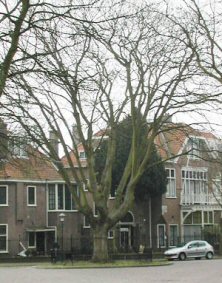 Tidying up the house the other day, I came across a leaflet of walks featuring historic and unusual trees in the area (Wandelroutes langs monumentale bomen). It had been lying lost and forgotten in a drawer packed with stuff about the neighbourhood. You know how it is, you think one day you’ll have time to follow up on things but somehow you never do. Well, shortly after I found it, there was one of those Sunday afternoons when we knew we ought to get out for a while but didn’t know where. And then I remembered that leaflet. Aha, good thing I’d kept it after all! It was a walk full of surprises. Even if you cycle around the neighbourhood practically every day of the week, you hardly ever really look at the trees. But during that Sunday afternoon walk we weren’t aware of much else. It was a kind of treasure hunt. The leaflet contains brief information about each of the trees, so that next time you cycle by them each one seems like an old friend. I look at them quite differently since then.

If you’d like to try out the walk yourself and get to know the trees in the area, see English translation of the leaflet.

This text may not be used or reproduced in any publication or other form of mediawithout prior permission.
Contact website-international@archipelwillemspark.nl