A: Every year a festival in Scheveningen, Vlaggetjesdag, marks the arrival of the Hollandse Nieuwe. Hollandse Nieuwe (or ‘Dutch New’) is the season’s first herring fished between mid-May and end-June, when the fish is at its fattest after the winter (it has to have at least 16% body fat!). 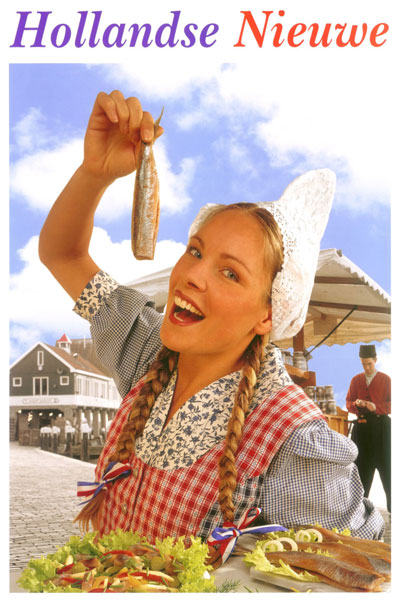 25 million kilos of Hollandse Nieuwe is fished in just six weeks. Herring that is caught after June can still be eaten but is no longer allowed to be bear this special name. In order to be called Hollandse Nieuwe, the herring has to meet specific criteria: it has to have been frozen for 24 hours to kill potential parasites, it has to have been filleted in the traditional way and it has to have been salted and left to ‘ripen’ for a specific period of time. Real herring is eaten raw, dipped in chopped, raw onions and held by the tail and lowered into the eater’s mouth.

That’s a lot of raw stuff – too much for me personally. I am told that this year’s Hollandse Nieuwe is ‘fattier’ than last year’s…