A: Putting the flag out and hanging your child’s school bag on the pole is a sign that they have passed their high school exams! You will see this all over Holland around the second week of June. 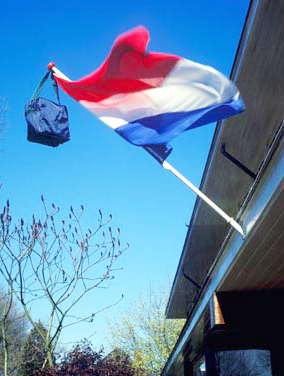 Schools started the bag-on-a-flag tradition when they hoisted a flag to mark the end of the summer exam period. A few decades later it was common practice for households to do this too, when a child passed his or her exams.

By the 1970s politicians questioned the legality of the use of the nation’s flag for this frivolity, but were overruled on the basis that it was ‘harmless’. These days the tradition is like a right of passage. I can remember being slightly embarrassed by all the fuss and the congratulations from the neighbours, nevertheless the bag-on-a-flag marks an important step in growing up.

Be warned: skipping the bag-on-a-flag could mean years of therapy to process the uncelebrated transition from teenager to adulthood!