All because of an unhappy love affair

In 1880, Aeilko Jans Zijlker from the province of Groningen, who left Holland because of an unhappy love affair, discovered oil on a concession (rather aptly) on the island of North Sumatra in the Indonesian archipelago. Ten years later in 1890, the N.V. Koninklijke Nederlandsche Maatschappij tot Exploitatie van Petroleumbronnen in Nederlandsch-Indië was established. King Willem III had a lot of faith in the new company and granted the ‘Koninklijke’ (Royal). It was decided that the main office should be located in The Hague, the seat of the royal court. At that time about forty oil companies were located in the city, so The Hague was also known as Petroleumstad (petroleum city). 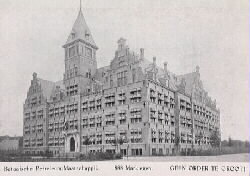 The first office was located in the back room of number 92 the Celebesstraat: the residence of the president of the company, J.A. de Gelder. At that time, the office only had three employees, the president himself, an administrator and a caretaker, who earned just 4 guilders a week. In 1907, the N.V. Koninklijke Nederlandsche Petroleum Maatschappij and the Shell Transport and Trading Company decided to work together and they became the Koninklijke/Shell Group. The two original companies became the main shareholders with 60% allocated to Koninklijke and 40% to Shell Transport. This 60/40 division still exists today.

Various sister/affiliated companies of the Koninklijke/Shell Group have been located in The Hague ever since, at a total of 106(!) locations.

From that original very modest address at the Celebesstraat, the company moved around the city.

First relocating in 1907 to Lange Vijverberg on the Hofvijver…

and finally ending up on Carel van Bylandtlaan in 1917 where a new head
office was built. 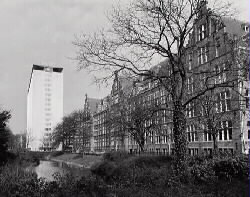 This building has had a number of extensions added throughout the subsequent years, and the expansion continues to this very day! 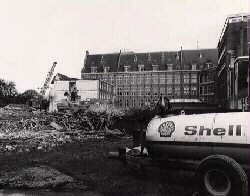 Demolition of houses on Raamweg in 1983 to make way for one of the expansion programmes.

Other past addresses of (sections of) Shell in the Archipel

This text may not be used or reproduced in any publication or other form of media without prior permission.
Contact website-international@archipelwillemspark.nl