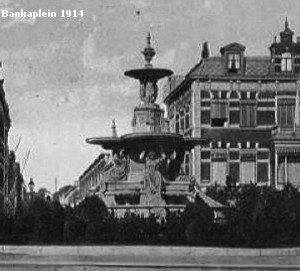 Bankaplein belongs to the most beautiful squares (better: roundabouts) in The Hague. It is surrounded by six splendid detached villas in neo-renaissance and eclectic style, built in 1883-’85 to be private homes. Most of them have been turned into office-buildings.

The centre-piece of Bankaplein is a beautiful fountain. Between 1881 and 1921 there was an even bigger fountain in Italian style, designed by the architect H. Westra jr, who also created the Haagsche Passage in the centre of town, Hotel Seinpost (pulled down) in Scheveningen and De Dierentuin (also pulled down). 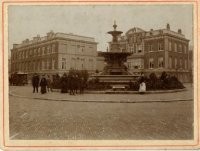 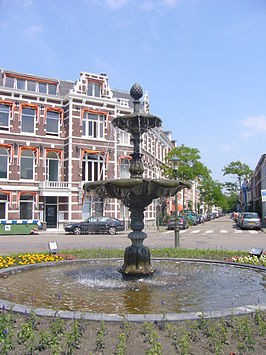 Characteristic of his work is the use of lifesize sculptures and eclectic influences. He could, however, also work on a smaller scale: Paramaribohofje (the almshouses off Surinamestraat) was also designed by him.

The old fountain was spectacular. Four maidens in classical Greek attire each carried a large dish. Over them stood smaller figures who together carried another dish. This impressive monument was removed in 1922 and replaced by a simple clock. There seems to have been no special reason to do this. I guess there were problems with the water-supply, or maybe finacially. Anyway, that fountain was pulled down and that was a great pity.

In the 20th century the neighbourhood repeatedly expressed the wish for a new monumental fountain on Bankaplein and since 1988 we are happy to have one again. Smaller than the first one, it consists of two dishes.

In the September edition of the local newspaper there will be more to read about it.