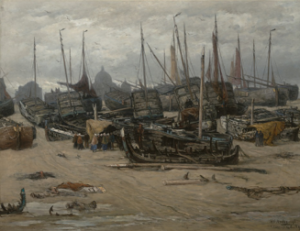 October 22, 2018, The Hague – Wild seas, threatening skies, havoc and fisherman’s suffering: from November 18 stormblick is at Panorama Mesdag, culminating with the storm of 1894. A special selection of paintings by, among others, Hendrik Willem Mesdag, Jozef Israëls , Louis Meijer, Andreas Schelfhout and Johannes Christiaan Schotel versus imagination.

Storm in nineteenth-century painting
Storms were a popular subject for artists in the early nineteenth century. Andreas Schelfhout and Johannes Christiaan Schotel painted romanticized performances in which they emphasized the void of man against the violence of nature. Around 1850-1860, the artists working at Scheveningen chose Willem Antonie van Deventer, Louis Meijer and Jozef Israëls to show the emptiness after a storm. Their poetic paintings look deceptively peaceful; it is only on closer inspection that the drama unfolds.

Mesdag
Mesdag also returned to the theme of storm. Central to this exhibition is Mesdag’s account of the storm in 1894 in Scheveningen, which he completed in 1896. His paintings of the storm of 1894 are, however, more realistic, almost journalistic. The pronounced drama and ugliness of the broken bomschutes are at odds with the peaceful Hague School paintings we all know. The different versions, which Mesdag worked on for years, are shown together for the first time in this exhibition.

In memory
Artists also represented storm from a social function. A commemorative book was published for each disaster. Thus Schelfhout drew the storm of 1825, which he saw with his own eyes: “When the terrible storm and high tide of water were the most horrible anger … I [I] have witnessed a spectacle of which, at the commemoration, my heart is still shrinking”, he wrote to bookseller Immerzeel. His first impressions, the elaboration and the commemorative book can be seen together in the exhibition. Mesdag also collaborated on a commemorative book, in memory of the storm of 1894.

Panorama Mesdag
Panorama Mesdag is the place to exhibit the theme of storm in nineteenth-century painting. Not only because Mesdags key work is in the collection after the storm of 1894, but also because Mesdag impressively depicted the old Scheveningen from before this disastrous storm in the Panorama. The storm of 1894 touched Mesdag personally; he realized that his beloved Scheveningen would never be the same again. His paintings of the storm symbolize this change.

The exhibition ‘STORM’ can be seen from 18 November 2018 until 3 March 2019.
The exhibition has been made possible by Stichting Schevenings Steunfonds, the Mesdag-Van Houten Foundation and the Prins Bernhard Cultuurfonds Zuid-Holland.