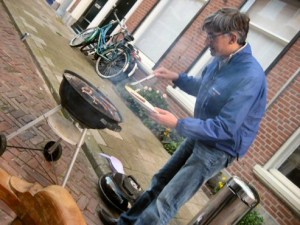 Usually an outdoor event in the summer, this year we held it on Saturday 10 April. It had to be a culinary and, above all, convivial banquet with fellow street residents! A registration form was dropped in the letterbox of all 121 Bali-houses so that residents could indicate their interests. In all 80 replied and were assigned to one of the seven “private” Bali eating houses.

A Meet-and-Greet was organised during the afternoon in the Thirty-Seven restaurant-club (Balistraat 1A); kindly made available by the management free of charge. And Mr Nomura of the Sushi Okinawa restaurant (Balistraat 3) nextdoor treated us to a large dish of sushi.

Because of the extraordinarily beautiful weather, most of the afternoon’s programme took place outside in the large courtyard behind the uneven numbered Bali houses. We were very lucky!

“Oma” and “Opa” Gemstone/Broekarts of Kunsthandel De Edelsteen (Balistraat 82) distributed lovely amethyst and citrine crystals among the young ones who were fully occupied playing games, devouring pancakes and being entertained by Manny the clown.

Besides all this two fellow street inhabitants sang to the rest of the residents, encouraging everyone to get to know each other better and to network more.

A great success with young and old alike was Salvatore, who surprised us with his parrot show!

In short: a formula for a most memorable street party, which should certainly be repeated.

Weather
Fine: not a lot of sun but dry.

Fine feeling to know the food and drink would remain dry whatever the weather. The council subsidy this time meant we could hire tents.

Party on Saturday
Better than the Sunday, which clashed with other events. Right after the school holidays (6 September) and before the start of  the football and field hockey season so no excuses not to be there.

Car-free street = biggest playground ever
Council permit and police cordon tape to close off the street; cooperation from the neighbours to empty the street. The kids had bags of space to play in and plenty of games, toys, go-karts and a bouncy castle rented from Sport-o-theek.

Colourful international gathering
More than 70 adults and children took part, including members of the expat fraternity in the street. The Canadians took care of the BBQ; they had the biggest one in the street!

The party certainly did its bit for better integration: an afternoon and evening full of chatting and fun to promote fellowship and mutual respect.

Conclusion
Let’s do it more often!

Annelies from Zuivelland supplied the cheese board …  and the residents the conviviality!

Lustrum newspaper
A special lustrum newspaper containing photographs and historical information about the neighbourhood has been published to mark the occasion and is available at the  ‘Klokhuis Community Centre.

On 12 June 2004 the then Deputy Mayor Bruno Bruins Met unveiled the marble fountain with a huge crane to mark the official and festive opening of the Burgemeester de Monchyplein (BM) complex. That was almost five years ago, reason indeed for the BBM Residents Committee to celebrate its first lustrum.

An open-air lunch concert will be held on Sunday 21 June to which all local residents are invited. Immediately after the concert there will be a game of Jeu-de-boules (French bowls) on the playing area near the Post Office, next to the Irene monument. Make a note in your diary.

As usual there will be the annual barbecue, with a special festive touch, for Monchyplein residents in the evening.