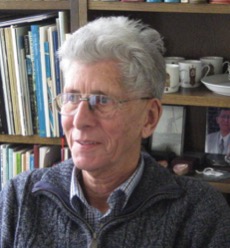 This time I met Mr Bob Feenstra, author of the book  ”De geschiedenis van de Haagse Archipel en Willemsparkbuurt” (History of the Archipel and Willemspark neighbourhoods in The Hague). The book describes the coming into being and the history of the two town districts. Willemspark was the first and the oldest district to be built outside the moats. The Archipel was built in the second half of the 19th century: a chic neighbourhood “on the sand”. The district kept its original appearance and character and unto this day it is very popular: its houses are sold for high prices.

A choice from the contents of the book: country houses, toll houses, almshouses, sculptures and monuments, the many tram lines that used to run through the district, the Vredeskapel and the far-reaching effects of World War II. Said Mr Feenstra: “When describing the sculptures and monuments of the district I found that one of the statues of the monument for the fallen PTT-ers (employees of the post, telegraph and telephone company) at Nassauplein has six toes on one foot and a thump on the wrong side of one hand! It seems that nobody noticed that before …”

“For years I have been involved in De Vredeskapel,” said Mr Feenstra. “On 12 November 2005 it was 125 years ago that the chapel was put into use and I was asked to write its history. I financed the publication myself and since the edition would be too small I enlarged it with the history of Archipel and Willemspark. Thanks to my work as a plumber I was allowed entry many homes, my father told me much, I read and I spent much time in the municipal archives to study the history of both districts. The first copy of my book was presented to Queen Beatrix. I admit that I am proud of that. De Vredeskapel had a close connection with the Royal Family. Queens Wilhelmina and Juliana used to come there.
For a short time De Vredeskapel flourished as a centre for culture and contemplation. Volunteers worked hard to give the building its new function in 2014: a centre for music, films, choir recitals and discussion meetings about sustainability and politics.
During a maintenance inspection the condition of the roof was found to be so bad that drastic measures had to be taken. The chapel was closed to the public and so it is to this very day. It is a national monument and therefore it has a protected status, but nobody knows what will happen to the building.

“My grandfather was a blacksmith, he came from Friesland,” Mr Feenstra told me. “In 1883 he came to The Hague and he settled in the almshouses situated between Sumatrastraat and Atjehstraat, where the playground is now. In 1893 he started his own shop; he made the connecting pieces between the post and the lamp of the gas lanterns for public lighting. In 1906 he moved into the premises where I still live; it has been family property for 110 years. My father was a blacksmith and a plumber and later he made himself familiar with central heating. I joined my father in the business, my wife did the administration and ran the shop where we sold the installation materials. Finally I phased the shop out and closed it down in 1997.
I have lived in the Archipel all my life and for 40 years I conducted guided tours in the neighbourhood. Last year I gave that up because the long walks became too much for me.”

I had heard it say that Mr Feenstra loves windmills. When I asked him about it his reaction was enthousiastic and brought out a beautiful illustrated book about windmills.
“It has been my hobby for 40 years,” he told me. “I am a member of the Gilde van Vrijwillige Molenaars (guild of volunteer millers) and I got my diploma. There are among others flour mills and polder mills that went from father to son, but today most of them are  run by volunteers. For years I have been active as a volunteer miller on a polder mill. Every year a group of experienced millers make an inspection tour along a number of mills that belong to our foundation. When I am ‘on duty’ my wife often comes with me and together we enjoy the beautiful scenery of the Dutch landscape. What more could a person wish for?”