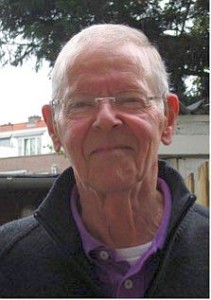 For this article I visited the actor Hans Peter Ligthart  who in November and February will put himself in the shoes of Baruch d’Espinoza in a number of performances in the red hall of De Zalen. In the historical monologue De Waarheid is naamloos (truth is nameless) he will introduce the listeners to the life and thinking of Benedictus Spinoza.

On the website I read that Ligthart was born in 1941 and that he has been acting since 1957. When I asked him his answer was: “Yes, that is right. I played my first part when I was fifteen. I grew up in Bussum and in secondary school I had a teacher who made me enthusiastic for acting. In my  schooldays I acted several parts, Gysbrecht van Amstel was one of them.
“By that time I had acquired a taste for acting. When I worked at Aegon, in my spare time I always played in an amateur acting company with very much pleasure.”

Hans Peter has acted in more than 80 parts and he was awarded best male leading actor in among others ‘A Delicate Balance’ by Edward Albee and for his part in De Bezoeker (the visitor) by  Eric-Emmanuel Schmitt.
To my question what was his one favorite role he answered that he could not say because he had been given so many beautiful parts to play. “But to mention a few: ‘A Moon for the Misbegotten’ by Eugene O’Neill which we played in the Koninklijke Schouwburg, ‘Virginia Woolf’ and ‘A Delicate Balance’ by Edward Albee. Those were magnificent parts. In the sixties I also played a lot of comedies,” Hans Peter said. “Recently, in the context of the 150th anniversary of Van Dale (Van Dale dictionaries), I played in De Dikke van Dale that was written by Heleen Verburg.”

The production of De Waarheid is naamloos is in the hands of Stichting Historisch Theater and Michel Meissen who wrote the monoloque is also directing the play. “I have known Michel Meissen for years,” said Hans Peter. “He has listed a great number of beautiful historical plays to his name. When he called me and asked if I wanted to play the part of Spinoza I immediately said yes. In a monoloque of one hour I (as Spinoza) tell about his life with now and then a side-step to our present time. And no, in spite of my old age, I do not find it difficult to remember that long a text!
“I did have to study Spinoza before I began. Everybody knows his name, but only a few know his life’s story.”

Spinoza was born on 24 November 1632. His parents were Jewish refugees from Portugal and he grew up in a traditional Jewish family. He was an unassuming and mild philosopher who laid the foundation for free speech, tolerance, freedom of religion and thereby also for the present-day democracy of our western society.  He asked the Rabbi complicated questions about the existence of God and in the end he was excommunicated by the leaders of the Jewish Community in Amsterdam because his ideas might cause unrest. He was considered to be an atheist who flouted the Bible and the Torah. Spinoza changed his first name Baruch (‘the blessed’ in Hebrew) into Benedictus (‘the blessed’ in Latin) and left for Rijnsburg. He cut lenses for a living and the cutting and polishing of glass became the cause of the lung disease that led to his early death.
The last 7 years of his life Spinoza lived on Paviljoensgracht in The Hague, where he wrote his main book “Ethica”. Spinoza died in 1677, only 45 years old.