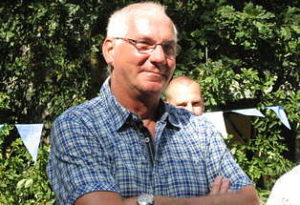 Who does not know this complex, designed by the architects Sjoerd Schamhart and Hans van Beek, right? With Couperusduin, Schamhart wanted to show what housing should be: urban diversity and location-specific. A city in miniature, embedded in the existing city. Schamhart used a number of starting points (interview Haagsche Courant at his 80th birthday): An important element for me is: what needs to be done, what is the function and what kind of people are involved? In addition, the place is important. Where do you build? Are you opposed to the place or do you just go with the environment? I build with the spot. I look at how something works. And also: how was it actually? I have restored the dune at Couperusduin. I made an artificial dune and that was nice because then I could lose all that can, the cars, underneath!
For the dunes excavated sand has been reused and the low walls along the footpaths from the demolished Alexander barracks that stood here before.

I, writer of this article, have lived with pleasure in this complex for years.

The face behind the front door of Couperusduin is Adrie Punt (caretaker) who, together with Ruud Oranje (technical maintenance), is the support and support of the residents. The reason for my conversation with Adrie that 17 July was the 25-year anniversary as a caretaker employed at Couperusduin. That was celebrated, together with the residents, with an animated reception in one of the gardens of the complex.

Adrie told me that he, as a mechanic, first worked in shipbuilding. When this company went bankrupt, I ended up at Otis Lifts and I already came for maintenance in Couperusduin. I heard from Ruud that they were looking for a caretaker, applied for and was hired and still do the work with a lot of pleasure.

In the job description, under the heading “General”: “The task of the caretaker consists of supervising and promoting a good course of events with regard to the maintenance of the object and the provision of service to the users. / visitors within the set frameworks. The work generally includes all that is useful and necessary to ensure a safe and orderly course of affairs in the object. Finally, the caretaker must always develop the initiatives that can not be described in detail, but which, in some cases, may be deemed necessary for the proper functioning of the technical equipment and architectural aspects of the object “. Then 8 specific tasks are described. It goes, of course, too far to mention them all, but the gentlemen have their hands full.
That may be clear.

Adrie told me that there are nice and also less nice things in his path. Like finding a deceased resident in her apartment after a phone call from home care. Or hoist a woman from a bath who could not get out of it herself.
Wanderers, who seek sheltered accommodation in one of the corridors, remove them again and again. He also mentioned the “bird woman”, a well-known resident who made up for rotten fish and spread food for the pigeons everywhere. Eventually, after a fall in the house, she was taken to a nursing home.

When it was still rented accommodation we could do more “small jobs” for the residents, Adrie reported. Now that the majority of the flats have been sold, the owners have to solve it themselves. We still do big jobs, of course, such as cutting open and smearing floors when, due to a leak, the heating pipe needs to be replaced. Unfortunately a regularly recurring problem. I can almost no longer hear the word “leakage”, but it is of course very nice that we can help the injured occupant. In short, a “varied” job that I still enjoy very much.