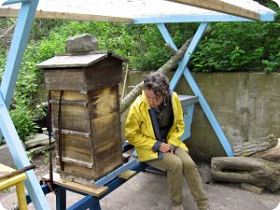 In the AD I recently read a message about the unexpected visit of a bee population to the Bankastraat where “local” beekeepers rushed to catch the bees. I did not know that we had beekeepers among our neighbors and I know no more than honey, queen and honeycomb. So it seemed like a good idea to make an appointment with the beekeeper Isabelle Hylkema. At her home, while enjoying a cup of tea, she told me very enthusiastically about her work and how she had come to become a beekeeper.
I did the Horticultural School and after that I worked for Shell, she said. I worked as a volunteer for the Muurkrant and for the newspaper I had an interview with beekeeper Victor Sterk, also living in the Archipel, and then I thought: I want that, too. I then followed a course at the The Hague Beekeepers Association and then the course Biological-Dynamic Imkeren.
Actually the honeybees tell us that things are going really badly with nature and that’s why I’m beekeeping. Together with Victor, that’s great fun because he likes to talk and also very well. He is also city guide, among others on the Ooievaart. We are the face behind the “Happy Bees” website and receive people from our bees and give them information. During the open days at our hive behind the Rudolf Steiner we stand outside with our “sweet” talk. But it can also be done by appointment.

She showed me a number of beehives. A beehive is made of hexagonal cells and is made from beeswax. They sweat this beeswax from their wash glands and gnaw them into comb. The cells serve as a nursery or for storage of pollen and honey. The drones (males) do nothing, Isabelle told. They do not get food themselves, are fed by the worker bees and actually fly around. That’s where the word “wandering” comes from. Drones provide the fertilization of queens. Not that from their own closet, that is, their mother, but one of the other queens and that is why they need “neighborhoods”. At the end of the bee season, when the supply of fresh pollen ceases, the so-called “dama-slaughter” takes place whereby the worker bees drive the drones out. First they are no longer fed, which causes them to weaken and then they are driven to the outside of the hive and then to the hive bottom. Eventually they are dragged out and flung off the flight board.

A bee population is about 20,000 in winter and 50,000 bees in summer.
When a comb is too full, they share. In the high season, the queen sometimes stores 2000 eggs per day. The worker bees (workers) determine whether a new queen should come. They then make so-called queen cells at the bottom of the comb which look like a kind of protuberance. It is clear: the queen is not the boss here!

Isabelle writes on her website: all bees – honey bees, bumblebees and wild bees – are dependent on what is blooming. They directly influence that environment. They take food (nectar) during flower visits and bring new life back to it, the pollination of the plant world. After their visit, fruit grows later for food. This creation of life and landscape has been arranged with a flower and far beyond Antiquity. That went well until the last century and modern bee diseases started in the 20th century. Numbers are dramatically reduced with consequences for the entire environment, for example the birds. Bee species disappear and the honeybees warn us as “the canary in the coal mine” that it can no longer continue.

Pesticides are the main culprits, according to Isabelle. As far as I am concerned it is now “five to twelve” for all pollinators, so also for the beetles, wild bees, bumblebees, etc., she said. Anyone can contribute his or her share and in the next Newsletter she will also give you some tips.