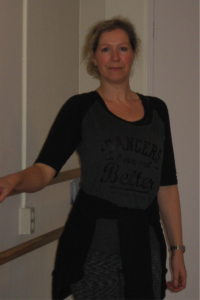 At the Pointeworks Dance School I had an interesting conversation with Liane van Veldhoven, principal of the school.

“When I was five years old I wanted to be a ballet dancer,”she told me. “I lived in Limburg and my first class was in Maastricht. After that I went to the Ballet Academie in Tilburg and when I was fifteen I went to the Nationale Ballet Academie in Amsterdam. My parents lived in Limburg and therefore I lived with a host family in Hoofddorp. I graduated from the Royal Academy of Dance in London and for a number of years I danced in that city. Then I met the love of my life, we married and got children. That is when I stopped dancing and started teaching.

“The Pointeworks Dance School exists since 1995 and I started working there in 2002. The then principal and founder left for the US in 2003 and she asked me if I would be interested in taking over the school. Which I did. We have three locations: here in the Archipel, in Overbosch and in Wassenaar. Since the summer of 2015 I work here on Malakkastraat, before that time I used the hall behind the Anglican Church.
“We have a great number of expat children here (many from the British School), but I also have Dutch children in my class. When I teach I speak a mixture of English and Dutch, but everybody understands what I mean to say. The largest group is the one of the 3 and 4 year olds. They love movement and my “help” during the lessons is the doll named Angelina Ballerina. For each lesson I think of a theme; we go, for instance, to the Zoo with Angelina. First we take the train (walk in a line to form the train).  In the Zoo are all kinds of animals that all move differently: birds fly, bears walk on all fours. I do the movements and the children imitate me. It stimulates their musicality and imagination. With the 5 and 6 year olds we do more “real” ballet dancing.
“I had a classical training, therefore I only teach classical ballet. Also to students whose aim is a professional career. My colleagues work with other forms of dance. To children of 6 years and older we teach modern ballet, jazz, hip-hop and street dance. From the age of 7 children can take an examination with an official examiner. Depending on their performance they will be awarded a bronze, silver or gold medal. It is an official, internationally valid examination.

“We also offer classes for grown-ups, young and old. A prima-ballerina starts young, but it is never too late to start with ballet. In class the ballet techniques and fun are interwoven in a very pleasant way.
“One of my colleagues now gives classes in Yoga Essentrics, which is practically unknown in The Netherlands. It is a workout that uses flowing movements, stretches and your own body. The focus is on lengthening the muscles, which makes the body strong(er).
“I would like to start a course for 70 and 80 year olds, the Silver Swan course as it is given in England. However, it is a two year course and  I don’t quite know how to fit that in, now that I have young children. For the time being it has to remain a dream …”

Would you like to contact Liane? The address of her dance school is Malakkastraat 152 and her telephone number is 06-48371601.