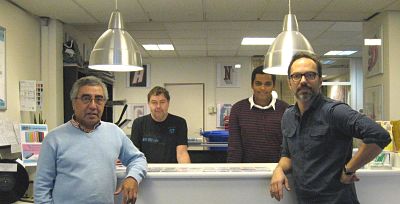 In the next few episodes I would like to bring a number of entrepreneurs in Willemspark to your attention. My first “victim” is Dizzy de Wijngaert (in the picture left), owner of The Printer Copy Service on Frederikstraat:

“I was born and bred in Amsterdam (as one can tell by his accent!). I studied Economy but found it too vague and therefore I moved on to Fiscal Duties. With a friend I ran an administrative office and I took care of the bookkeeping and fiscal section. When I was a student in Amsterdam I lived nextdoor to a copyshop and I always saw posh cars parked in front of it, while I had to work late hours in a bar to make some extra money. I don’t doubt that is how things started.

“How does an Amsterdammer end up in The Hague? That’s simple: Because I was asked to do a fiscal duties project. And I met a nice girl here, who is now my wife, so I stayed. In 1982 I opened my first shop on Dr Kuyperstraat en in 1988 I moved to this location on Frederikstraat. In The Hague and Leiden we now have 2 shops and we  have branches in Voorburg and Rijswijk.  The shop in Rotterdam I just sold. I would have liked to have 50 shops, but that did not happen due to illness and now I have reached the age where one rather likes to diminish one’s work. I have a lovely house in Portugal where I live part of the year.

“I don’t know anything about graphic design, but of course my employees do. At the outset we only made copies. Up to 50 million a year, a lot of it teaching material. But that is now behind us and we moved from copy-shop to printed matter and print-service. We can print on paper, fabric, wood, tiles, mugs, shoppers, flags, textiles, bicycle crates (!), we can even lay a whole door on the printer. The sky is the limit. We import the mugs and tiles from the Far East, from China, and I do that myself. I love China, so I don’t deny myself these trips. Printing in colour, both in small and in large sizes, is now our core business. Printing on demand is now the famous word; the client decides the number of prints. Printed matter always comes in large quantities, because a printer will not start his press for a small quantity.

“We are about to start with another concept. Part of the shop has been partitioned off for it and now has a separate entrance. Two new employees will repair cellphones, smartphones and tablets, especially those no longer under guarantee. They also specialize in data recovery, for instance for smartphones that fell into the water. I am told that the day after the King’s Day is very busy; obviously many a phone falls on the ground on that day. I’ll make sure that we are open!”

Do you need a mug with a personal print, a nice wall-size photoprint for your hallway or does your smartphone give you trouble? Just go to The Printer Copy Service and Smartphone Repair, Frederikstraat 74 and 76.