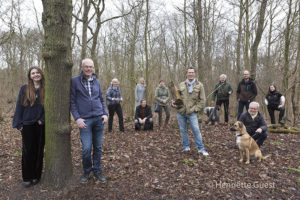 De Denktank [Think Tank] handed over the vision to Alderman Revis on September 18th. The vision, entitled “Bring Romance Back”, focuses on better connections in the area, as well as strengthening qualities. The governor will handle the vision in the college van burgemeester en wethouders this month and later this year in the city council.

[ Note:  college van burgemeester en wethouders is the executive board of a municipality in the Netherlands, consisting of the mayor (burgemeester) and the members of the municipal executive (wethouders) ]

The task, received from the college at the end of 2016, is now complete.

We invite everyone to get to know the vision. This can be found on our website  and downloaded there.  We also thank you for all suggestions, comments, comments, letters, mails and responses to social media we have received in the past few months and contributed to the vision.

On October 3, we have planned a walk-in meeting. At the Crowne Plaza hotel ( Van Stolkweg 1 ), the members of de Denktank will be present to explain the vision. Everyone interested can share their thoughts. In addition, this is our “thank you” for all those who have helped us in the past, in any way, in reaching the vision.

To get an idea of ​​the number of interested parties and to take into account catering requirements, we will ask you to sign up in advance. That can be done through this link .