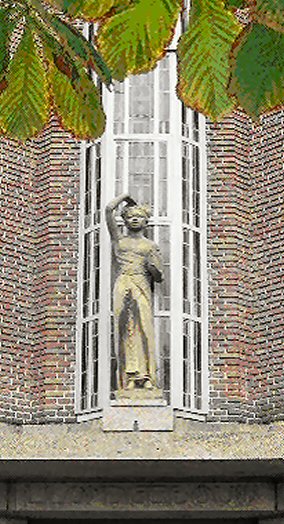 19 November 2010 – The Hague municipality’s Bureau for Monuments and Historical Sites (Monumentenzorg) has launched a joint project with the Historical Museum of The Hague entitled “Sporen van Smaragd” (Traces of Emerald). It will study the Dutch East Indies heritage in buildings constructed in The Hague between 1853 and 1945.

Three centuries of close contact between Holland and the Indonesian Archipelago have left their mark on both present-day Indonesia and the Netherlands, but especially on The Hague. One of the city’s most characteristic quarters is called the “Archipelbuurt”, where most of the streets are named after islands of the Indonesian archipelago.

At first the sultanates of the ’emerald girdle’ of islands around Java were simply trading partners. From the 19th century onwards, however, the archipelago became a colony. Indonesia gained independence in 1949. The Indonesian Monument in the Van Stolkpark serves as a reminder of the human lives sacrificed during the Japanese occupation of the former Dutch East Indies.

Between 1945 and the mid-sixties roughly 300,000 people of all ranks and ages migrated from Indonesia to the Netherlands; most of them were people of mixed descent (Eurasians), born and raised in the Dutch East Indies. The Eurasian culture is kept alive by the Indies Cultural Circle and the annual Tong Tong Festival (formerly Pasar Malam Besar), an Indonesian market and fair, among other things. The Tong Tong Festival is the largest Eurasian festival in the world.

The goal of the project is to take stock of the original traces of the Dutch East Indies heritage in The Hague and make them accessible to a wide audience.

The project consists of three parts:

Many photos of The Hague’s Dutch-Indonesian are already available in the image archive, including a selection of historical photos from the Haags Gemeentearchief.

Do you live in The Hague and have photos of buildings displaying some link with Indonesia? Do you have a story you would like to share? Then get in touch.

A posting from the Archipelbuurt:

The writer Louis Couperus (1863-1923) lived at this address till his marriage in 1891. Architects W.C. Rijswijk and G. Posthuma designed the house for his father John Ricus Couperus (1816-1902) in 1883-1884. The Couperus family had close ties with the Dutch East Indies, clearly apparent in the author’s body of work: De Stille Kracht (The Hidden Force) for example describes the chasm between the Dutch colonists and the East indies locals, while Van oude mensen, de dingen die voorbij gaan (Of old people and the things that pass) shows how the colonial past has influenced and haunted generations of Dutchmen and reveals the lives and secrets of the slightly decadent social milieux of people who made their fortune in the Indies and moved in the highest circles in The Hague.