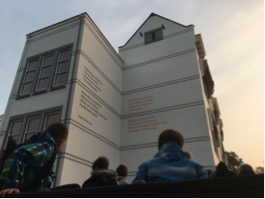 Dozens of children of the International Primary School HSV on Nassaulaan and their teachers and parents were present at the festive unveiling of the twelfth wall poem. Never before were so many people present at the unveiling of a wall poem of the Stichting ArchipelpoëZie. Mrs Ingrid van Engelshoven, chairman of the executive committee for education, and Mr Adrian J. Pratt, cultural attaché of the American embassy were there.
The children made themselves heard: two girls and two boys recited the poem Yesterday is History that was written by the American poet Emily Dickinson. Two versions of the poem are now on two adjacent walls at the back of the school: the original English version and the Dutch translation that was made by Peter Verstegen. From Mauritskade one can see the English poem very well.

When Ruth van Rossum, chairman of Stichting ArchipelpoëZie asked the boys and girls who of them had ever tried to write a poem a lot of hands were raised. Ruth said that was good, because writing poetry is exciting. In English Ruth told that Emily Dickinson was born in 1830. She never married and lived all alone in order to be able to write. She wrote no less than 1800 poems. During her life only seven were published – without her name being mentioned. Only after her death, more than 100 years later, she got the acknowledgement she deserved.

The letter was designed by a true professional: Peter Matthias Noordzij. “How long do you think it took him?” The answers varied from one hour to ten years. The latter came closest, because Noordzij worked for about eight years  on the letter. Van Rossum: “He called the letter Caecilia, after his wife Cécile. When you look closely you will see that all letter types are different, the way human beings have different characters. In the Caecilia each part of the letter has the same width. Most of the chocolate letters that are made for Sinterklaas are Caecilia letters.”

Frans de Jong, principal of the school, called upon Mrs Ingrid van Engelshoven to speak. She said she was very happy for a number of reasons. First because the poem brought one more piece of art into public space. “And a poem is also beautiful because it makes you think.” Next: this event proved what can be done when a neighbourhood and a school work together. And lastly the poem consists of beautiful words: “Words that matter, that make a contribution, especially in a rough-spoken time.”
De Jong: “Maybe we do not understand all of it, but it certainly is a beautiful poem.”
Lorraine Dean, principal of the international department of HSV, cast a glance into the future: “In twenty or thirty years time, when all of you will be grown-up, this poem will still be here. Later this moment will be a precious memory to you.” She gave everyone a picture postcard with the poem and a portrait of Emily Dickinson.
Green and yellow balloons flew up into the air and with that the poem was officially unveiled.
Teacher Tom brought out his guitar and all the children sang a beautiful song that was composed especially for HSV: “Stad waar paleizen staan, stad van de ooievaar, stad van ons allemaal”  (city of palaces, city of the stork, home town to all of us) with a number of stanzas in English woven in.