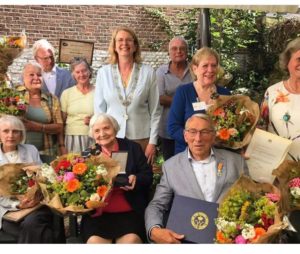 “Our” neighborhood bus existed for no less than 30 years on 27 June!
All those years, thanks to our volunteers, the neighborhood bus has provided transportation for the elderly and disabled in the Archipel, Willemspark, Zeeheldenkwartier and part of Duinoord districts and we hope to continue this for many years to come.

This memorable fact has been extensively celebrated with subscribers, volunteers and a large number of guests. On June 13 a boat trip through the Biesbosch was planned for volunteers and subscribers, including lunch on board.
On June 28 there was an animated reception at ‘t Klokhuis. The weather also helped, with a festive sunshine, so that the large terrace could be fully utilized.

But, without volunteers there is no neighborhood bus!
The ladies from the hotline who take the reservations, the drivers and the board, they all contributed.
A number of them have been active in the neighborhood bus for many years and they were rewarded with a city pin, a city medal and a royal award during the reception. Personally I thought it was a great honor (partly because I had invested so much time in it!) That Mayor Paulien Krikke himself had come to pin the pins and the ribbon to the honorees.

Just like during the general ribbon shower on April 26 (when our volunteer Mathilde Witsen Elias already received her royal award), she did it again with enthusiasm. Liesbeth de Bles, Elisabeth Konig and Ineke Holtzer were honored at Meldpunt. Riky Krul and Dorothe van der Donk received the city pin from the drivers and Gerard van Santen (already in possession of a city pin) received a certificate. Our chairman Hans van Gent, who handed over the baton to his successor Fred Wilhelmus during the reception, was pleasantly surprised with his Royal Award. After 18 years as chairman, he had more than earned this award.

The reception was graced with music by Rob Agerbeek (former pianist of the Dutch Swing College Band) and contra-bass player Erik Albjerg.
In short, all ingredients were present for a successful party.

The photo is of the honorees, together with the mayor.